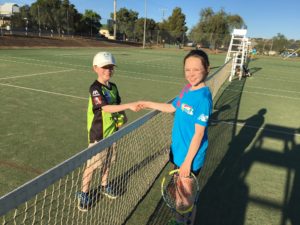 As the warmer weather approaches it’s a great time of year to be playing tennis. This week a new group of budding stars were in action on Wednesday at the start of the inaugural ANZHotShots red ball competition. Almost 30 contenders hit the courts with an abundance of enthusiasm along with mild trepidation, but after their half hour of
play they were all smiles.

With the assistance of Parkes junior squad members who were on hand to help the next generation start their tennis journey, the youngsters concentrated hard to direct their serves cross court and tried their best to comprehend the tennis scoring system.

There were plenty of rallies with most of the players running around to hit their preferred forehands in fear of a wayward backhand stroke, but all displayed their eagerness to return next week for more HotShots match play.
The competition will run for another six weeks.