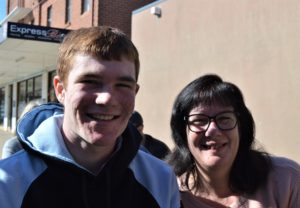 A talented musician from Parkes High School scored a rare opportunity to work under an internationally renowned composer to reimagine the great love story of Romeo and Juliet. Gordon Richter’s love of music takes him to Sydney two to three times per month as a member of the Sydney Youth Orchestra, but his most recent trip, lasting for five days, was a completely new experience working under Paul Rissmann to help reinvent the great orchestral work of Sergei Prokofiev.

“It was really, really good and a different challenge,” said Gordon. “Paul Rissmann worked really well with us kids to get 22 minutes’ worth of music.” Paul has worked with the London Symphony Orchestra, New York Philharmonic and many of the world’s great orchestras. The Central West’s representation was complemented by three dancers from Cowra. “That was our biggest challenge in composing the music – we had to think if it could be danced to.” The dance students choreographed a routine to the new score, and the combined work was performed at the Sydney Conservatorium of Music.

The conservatorium is where the Year 12 student hopes to return to next year to do a performance degree on the clarinet, his main instrument. While his second instrument the uncommon bassoon, which kids often mistake for a didgeridoo, has provided him with plenty of opportunities and experiences, like being offered a position in the Sydney Youth Orchestra, his love of the clarinet started very young.

“I went to a concert when I was small and heard the clarinet for the first time and really liked it.” As his mum Melinda is a piano teacher it was decided he would do a different instrument and he started lessons in Year 2. It was his teacher Justin Screen of the Mitchell Conservatorium who asked him to take up the bassoon.

While there are hardly any other clarinet players in Parkes, there are loads of them elsewhere which makes it harder to get positions in orchestras. Playing the bassoon has provided Gordon with lots of opportunities  to grow his ensemble playing experience and exposure. He feels confident about getting into the Sydney Conservatorium, and ultimately the Paris Conservatorium – one of the best for clarinet in the world – as a post-graduation option.

Gordon has his future plans mapped out and would love to play in orchestras once he has completed his studies. “Getting a position in the New York Philharmonic would be amazing.” Bringing him back to earth is Mum who
reminds him that for now he has to focus on his HSE, as his points would be taken into consideration on top of an audition for acceptance at the Sydney Conservatorium.

“The Romeo and Juliet experience in Sydney opened up a whole new experience for Gordon in terms of composing,”
said Melinda. This was very valuable as he has to compose a two-minute piece in contemporary classical music for his HSE Music Extension syllabus. “It is fantastic to see your child discover what makes them excited about the world. Gordon loves what he is doing,” said Melinda.