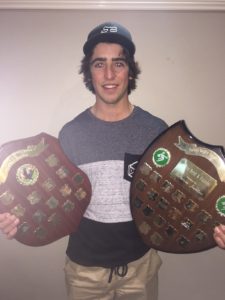 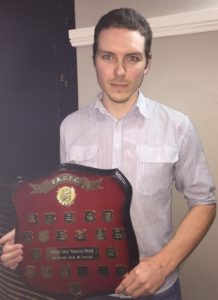 The recent Parkes Boars presentation night acknowledged the stars of the 2017 season with Joe Nash and Pat Jones walking off with the most awards. Joe received three senior awards for First Grade Best and Fairest, Most Points and
Most Tries. Pat had a spectacular year for the Boars Colts and took four awards for the Colts Players Player, Colts Best and Fairest, Colts Coaches award and Club Rookie of the year.

Ethan Kosef, who won second grade Players Player, and James Sellings second grade Best and Fairest and Coaches
Award, are both players to watch in future seasons. Another junior rewarded for a great year was Jason Lowe earning the Club Player of the year.

The Malaki Fisi’ilose Memorial award for Clubman of the Year went to Josh Miles. A popular award recipient was Cathy Ryan who received life membership for years of service. Cathy has been the seniors club strapper for over ten years and prior to that with the juniors tending to player injuries.

Cathy was also Publicity Officer for several years. Michelle MacGregor was recognised for her work with the junior club and awarded the Greg Connor Award for Junior Development. Incoming President Rory Nock thanked the outgoing committee in particular Jake, Di and Stuart Elliott who put in a tremendous effort for the club this year. Special mention went to Ed Lowe who stood down from the treasury position after four years. Allan Ryan received the President’s Award for Publicity and photography for 11 years.