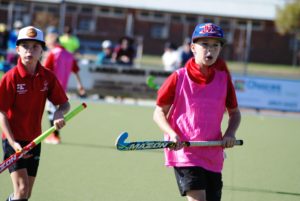 The award-winning Kookaburra 8s Carnival held in Parkes last weekend was once again a huge success with over 130 players from 13 teams taking part.

Kate Pulbrook, Regional Coaching Coordinator who arranged the event, announced early this week Parkes would once again host the event next year. “It was a fantastic weekend of hockey,” said Cherie Johnston, Junior Director Parkes Hockey Incorporated. “Parkes loves hosting it and we are already looking forward to next year!”

The Kookaburra 8’s is a carnival for Under 11s, playing half field games with the softer and safer Joey Ball. The 13 teams were from Parkes (8 teams), Molong (2), Orange (2) and 1 mixed team made up from players around the Western Region.

Other events included a skills showcase for players 12 and up celebrating National Hockey Week, there were fun competitions for all K8 players, and Just Hockey was on site to answer all hockey equipment questions.

Comments on Facebook were very positive with some saying: “Congrats to all involved – well organised, great coaching tips.”, “Kids had a great time. Lots of fun.” “I want to say a big thank you to everyone for making it such an amazing weekend! Cherie and Glenn Johnstone, Kristy and Steve Collins, Jim and Sonia Daley, Aaron Huppatz, Mandy and Ian Westcott and all the coaches and canteen helpers as well as Kieren Deland for the umpire development workshop,” said Kate.