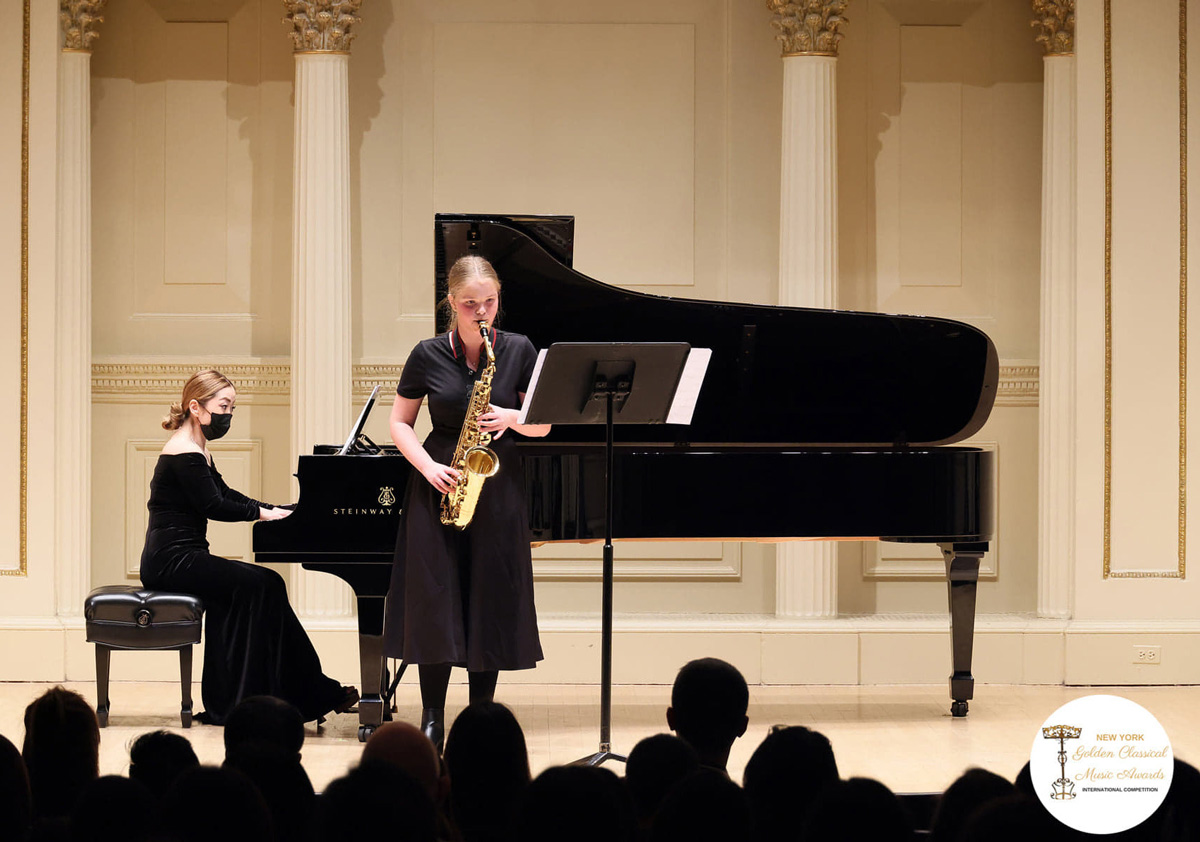 Fourteen-year-old Annabelle van Wyk made her debut in New York last week at the Winners’ Concert of the Golden Classical Music Awards in the Weill Recital Hall at the world famous Carnegie Hall.

Fourteen-year-old saxophonist Annabelle van Wyk made her New York debut last Monday at the Carnegie Hall, the most prestigious concert stage in the United States.

“It was amazing. Carnegie Hall is definitely an awesome place to play, not just because of the wonderful acoustics and beautiful interior, but also because of its history. So many incredible people have performed there, and it was unbelievable to follow in the footsteps of the icons,” said Annabelle.

The former Parkes Christian School student won the Intermediate category (13- 15 years) of the ‘Golden Classical Music Awards’ and was the only Australian among the 30 other winners who performed at a recital at Carnegie Hall last week. She played Concertino for Saxophone, Opus 78 by Jean-Baptiste Singelee.

She said her performance went really well, but it was slightly daunting to play in such a famous venue. “I saw my dad in the audience as I walked onto the stage, but after that I was just focused on playing.”

The best memory for Annabelle of her performance was the incredible acoustics in the Weill Recital Hall. “It is the only place I have played where I could hear myself perfectly whilst playing. It was a surreal performance as I could almost experience what the audience heard! In most places, I can barely hear myself, making it difficult to adjust my sound and expression in performances, but this wasn’t an issue in Carnegie Hall.”

In her five years of playing the saxophone, Annabelle has performed at different venues from busking on the streets of Peak Hill to the Memphis Stage at the Elvis Festival to playing a solo at Overture at Cooke Parke Pavilion in April this year.

“Carnegie Hall is by far the most impressive place I have ever played in! Not only in terms of the prestige, but also because of the acoustics. The architect was a cello player, so he took inspiration from the shape of a cello and modelled Carnegie after that. It means that the sound vibrates from underneath the hollow stage, which is why I could hear myself playing, and then moves to the audience.

“All the structures are rounded to allow the sound to continue to move for a long time. This means no matter where you are sitting in the audience, the sound will be exactly the same. Carnegie Hall definitely lived up to my expectations! It is just so beautiful and an amazing place to play.”

Annabelle’s saxophone teacher from Parkes who has been with her since she started playing saxophone said he was very excited at her success. “Anabelle has been a musician who has demonstrated that success comes through diligence and hard work. She is a tremendous player and I wish her continued success as she keeps playing saxophone,” said Paul Brown.

The glamour of Carnegie continued for Annabelle as she and her dad explored some of the famous New York sights and catching two musicals on Broadway. “Seeing Chicago and Phantom of the Opera were a definite highlight.

“I also loved how New York came alive at night. All of the lights were dazzling after sundown, especially in Times Square. New York is just so lively with seemingly endless amounts of people, doing different things. It was really interesting to just walk around and see everything! We also visited the Statue of Liberty, Central Park and the 9/11 memorial.”

Although she’s had to come back down to earth pretty quickly being back at school in Orange this week, she has a symphony of memories in her head and a dream to go back to Carnegie. “I would be honoured to play in Carnegie Hall again someday. It’s an incredible place to perform in and hopefully I am invited back one day.”