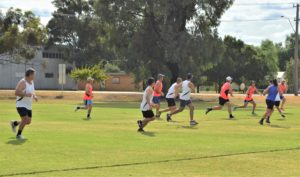 The Parkes Shire Council teams won both the men’s and mixed divisions of the 26th Local Government Touch Football Carnival held in Parkes last Saturday. In the grand final Parkes beat the Brisbane Council in a close match 6-5.

A total of 17 teams from the eastern states took part. The full results for the carnival are: 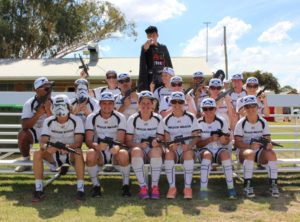 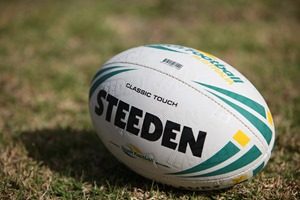 22 teams competed at the 24th annual Local Government Touch Football Carnival this weekend, with all vying for the title of the fittest and most skilful team. The action began at 9am, with players from men’s and mixed teams batting it out across seven playing fields at Cheney Park. Teams travelled from across the country with some from as far afield as Brisbane. Parkes Shire Council’s Tourism Team Leader, Tracy Ellery said, “The Touch Carnival is a unique opportunity for Local Government and allied organisation staff to network.

The day featured seven hours of quality and sometimes intense touch football action. St John Fist Aid volunteers only saw a few minor injuries this year which was good.” After the finals, hundreds of players then moved on to the Parkes Bowling & Sports Club for the presentations followed by a few hard earned beers.

“Some of the teams put a lot of effort into their uniform, which really adds to the atmosphere and fun of the Carnival. Parkes Shire Council is now looking forward to welcoming all the teams back in 2017 for the 25th anniversary of the event” said Tracy.