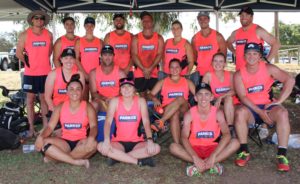 The table is set to determine the top council footy team at the 26th Local Government Touch Football Carnival at Cheney Park tomorrow. Parkes Shire Council staff are ready to go head-to-head with their Council counterparts from 16 other local governments from the eastern states.

The annual event, hosted by Parkes Shire Council and sponsored by JR Richards & Sons, has become a staple event on the local government social calendar.

The purpose of the day is to put stamina, strength and sporting ability to the test as the teams vie for the title of the fittest and most skilful organisation, but the day is also a great social junket.

“The competition for Best Dressed Team is always hotly contested, with Brisbane City Council returning in 2018 to defend their title,” said Kent. Teams will play a round-robin style tournament with two grades in both the men’s
division and mixed divisions. Aside from bragging rights for the year, official prizes will be awarded to the winners and runners-up, as well as the player of the final. For the more social participants, prizes are up for grabs for the best dressed team. This year each of the teams will also be presented with a special gift.

It is expected the tournament will inject around $40,000 into the local economy with 200 players converging on Parkes for the weekend. Set to be a great family-friendly day out, residents and visitors are encouraged to cheer on the teams from the sideline with the carnival kicking off at 9am.