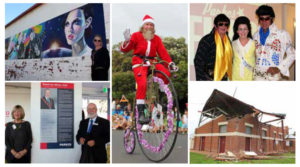 Looking at international news events 2016 might go down as one of the worst years in history, but on the local front it has been an enormously successful and productive year for the Parkes Shire, according to Mayor Ken Keith. He told The Parkes Phoenix the success of the year culminated in the Council winning the prestigious AR Bluett Memorial Award for the most progressive rural council in NSW. “We have also been successful in receiving three awards for our burgeoning Elvis Festival, two environmental awards for PAC Park and achieving accreditation for our workplace health and safety systems. It is quite an achievement for Council to reach the highest level for the first time.”

The completion of the turf 2 hockey complex, along with Mariah Williams and Scott Westcott’s selection for the Rio Olympics, were definite highlights for the community. The Mayor also listed the conclusion of the Lehman Bros settlement with the recovery of 70c in the dollar as a highlight for 2016. “The redevelopment of the Parkes Regional
Airport with the impressive looking new terminal building appropriately named after former Mayor, the late Robert Wilson OAM, and the conclusion of the building of Lake Endeavour dam and spillway, need a mention too,” he said. With one of the wettest winters ever experienced, the Mayor said: “What a year it was to try and implement improved business structures with our engineering team faced with the most challenging road conditions to maintain, and on top of that we had the freak tornado like storm that ripped through Parkes in October unearthing hundreds of trees and lifting the roof of the iconic race course grandstand.”

The Mayor said the wet conditions also made it a challenging year to start work on Council’s new sewage and water treatment plants. “But work under the John Holland Group is progressing very satisfactorily. The $85 million cost of these facilities also includes a recycling capability with a recycled water ring main. “The Parkes Shire Council launched its new branding for the Shire community based on positive feedback that it all adds up to live in the Parkes Shire.”

Mayor Keith said the year ended on a high note with the resurgence of the Christmas Street Parade, enhanced by the Sparkles Illuminations transforming buildings into an outdoor Christmas exhibition.” Looking ahead the Mayor said: “We look forward to 2017 with optimism and to celebrate the 25th anniversary of the Elvis Festival, the completion of major capital works projects and the opportunity to restore and upgrade the road network.”