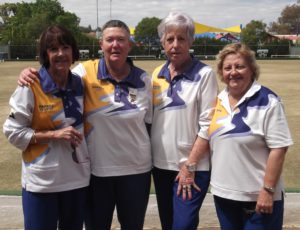 The final of the Club Championship Fours were played this week and was won by Elaine Miller, Brenda Davies, Rhona Went and Liz Byrne. They defeated Marja Iffland, Valmai Westcott, Gwenda Carty and Cherie Frame 27-24 in a great game.

Melbourne Cup day will be mufti dress, fun attire to be worn.

As daylight saving has commenced please ring table selectors Gwenda Carty and Di Greenhalgh between 8:30am and 9am, for play at 9:30am. Social roster is Laurie Keane.