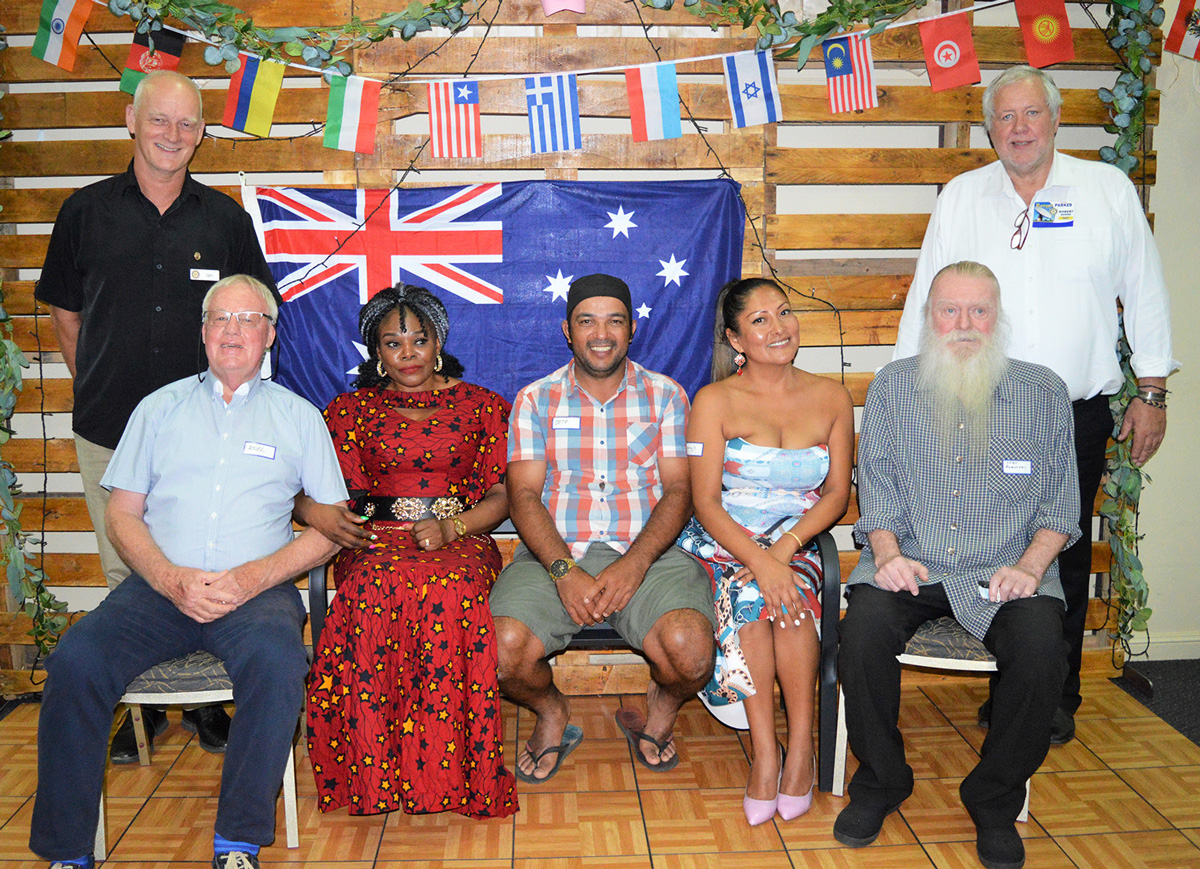 The six members of the Parkes multicultural community who shared their stories on YouTube were celebrated at the Rotary multicultural dinner on Saturday. Standing are Ian Freestone and Robert Shore from Rotary who commissioned and produced the series. Sitting are (L-R) Roel ten Cate, Maureen Ilechukwu, Beto da Silva, Nancy Cayo, and Stan Adamski. Nin Mao was not present.

The YouTube episodes of six members of the Parkes multicultural community that was launched last week have already made a big impact in Australia and internationally.

The Parkes Rotary Club started a YouTube channel last year and decided to record six episodes to tie in with this year’s Australia Day theme of Reflect, Respect, Celebrate using a special grant from the Australia Day National Council.

At the dinner Nancy Cayo from Peru thanked Robert and Ian Freestone, who produced the episodes, for the opportunity to share their story. “Some of us did not feel confident because of our lack of language skills, but Ian made us feel so comfortable. It is very important that we share our stories to make it easier for us to integrate into the community.”

Nancy said there were so many friendly faces in Parkes who had made her feel welcome. “Keep doing what you’re doing to make people feel welcome,” she said.

Roel ten Cate said Ian had done a fantastic job producing the videos. “It was a real privilege to tell our stories.” Roel was only six months old when he moved to Australia with his family from the Netherlands. “We only came for five years, and 70 years later we are still here.

“There are stacks of stories out there,” Roel said in response to a suggestion by Ian that a second series might be in the pipeline.

Rob, a former history teacher and lover of folk history, said oral history was very powerful, “so much more when the speakers are from our community”.

In his speech Parkes Shire Mayor Ken Keith looked at the history of Parkes and how its population had been multicultural from the very beginning. In the 19th century there were Chinese people tending the vegetable gardens at Billabong Creek to provide food for the mining community. “They were instrumental in getting Parkes established as a community,” the Mayor said.

The next big influx came after WWII when Polish immigrants were housed in the huts at the airport that was used to accommodate trainee pilots during the war. “Polish was the second most common language in Parkes for over 50 years.”

He named some examples including Danilenko Street that was named after the son of an immigrant who volunteered for the Vietnam War and never returned. “The street was named in his honour.”

The Mayor said it was sensational that Rotary had organised the multicultural dinner. “It would be lovely to see it continue every year.”