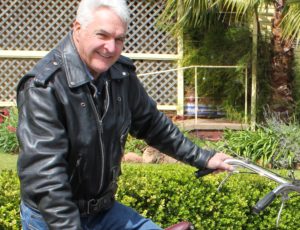 The Parkes Antique Bike Rally, first started in 1977, celebrated its 40th anniversary over the long weekend. A special commemorative medallion was made featuring Brian Coote’s 1914 Douglas, as he was one of the instigators of the rally. Only one entrant, Don Liddle, a former president of the Veteran & Vintage Motorcycle Club based in the Sydney region, has been to all the rallies. According to Bob Steel, organiser and founder of the event, most of the original entrants have either passed on or are unable to ride. The number of entrants was also reduced to 31 this
year because of the closure of the Newell Highway. Parkes locals who took part were John Frogley, Rex Veal, Brian Gray, Scott Mill, Ray Johnston and Bob Steel. Ray Johnson on his 1960 BSA came first in the Post war 1945 – 60 category.

The Saturday run took them to The Dish, and on Sunday they went to Eugowra, Cudal and then Molong.