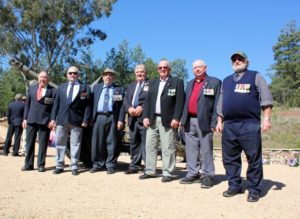 Veterans and members of the community commemorated the 50th anniversary of the Battle of Long Tan last Thursday at the Vietnam War Memorial in Parkes. The Battle of Long Tan was one of the fiercest battles fought by Australian soldiers in Vietnam and involved 105 Australians and 3 New Zealanders from D Company 6RAR. A total of 17 Australians were killed in action and 25 were wounded, one of whom later died of his wounds. Arthur Parker, President of the Parkes RSL Sub-Branch, said it was a monumental battle in which soldiers exhibited extreme bravery. “Notwithstanding these facts, we should also remember all who served in Vietnam regardless of the tasks which they were allocated to perform.”

Arthur paid tribute to Harold Amor, a former Parkes man who recently lost his battle with cancer in Queensland. “Harold served with the Fifth Battalion Royal Australian Regiment in Vietnam 1969/70.” Australians served in Vietnam from 1962 until 1975, where 521 people lost their lives and more than 3,000 were wounded.