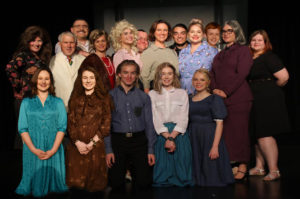 Although the latest Parkes M & D production is about the downtrodden working life of three women, it promises not to be a drag. Featuring music and lyrics by Dolly Parton, 9 to 5 is set in the late 1970s and is a hilarious story of friendship and revenge that is thought-provoking, outrageous and even a little romantic.

“It is a relatable story and still relevant today,” said Angie Drooger who plays the role of Violet. Her co-stars are Brittani Carol as Judy and Erin O’Leary as Duralee. They work for Franklin Hart, played by Greg Ballantyne, who is a sexist, egotistical, lying, hypocritical bigot.

“Some of the scenes I felt right at home as it was so similar to my real life work situation,” said Angie. “But we do get up to some crazy antics like kidnapping our boss, which is probably very unusual.” According to Angie this high-energy show with lots of fun is ideal for all ages. “My three-year-old son watched the whole show.” It is rated PG.

The cast of 19, with mostly females, is a good mix of adults and students. The cast includes some new faces while the lead roles are all played by local actors cast in previous shows. The majority are from Parkes, but one came all the way from Western Australia, and three are from Forbes.

“The audience will not only relate to the story, but there are lots of good songs by Dolly Parton, including the hit theme song,” said Angie. The 9 to 5 cast and production team have once again pulled together and worked long hours to make it a true community effort.

The musical will run at the Little Theatre in Parkes from tonight until 28th October. Tickets are available online at www.parkesmandd.com.au.