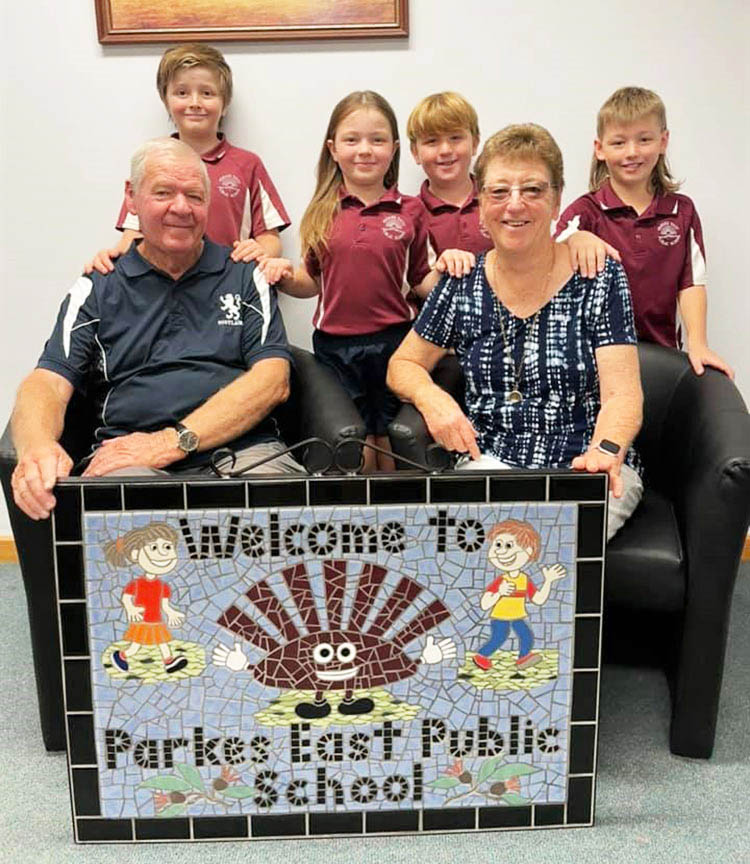 THANKFUL… Maureen Massey made this mosaic as a farewell gift to Parkes East Public School when she retired last week. With her is her husband Peter and at the back are four of her grandchildren who are students at the school. They are William and Olivia Mathews and Lockie and Max Jones.

She wears many hats in our community, but after 50 years in the profession Maureen Massey finally decided it was time to take off her teaching hat.

She retired from Parkes East Public School last Thursday just before her 70th birthday ending an association of 41 years with the school as a parent and teacher.

“The eldest of my three daughters started in 1980, and I’ve had six of my 12 grandkids in the school. It was pretty special to have that.”

Being a learning and support teacher for the past 20 years, Maureen has built up a special bond with many students. “I am going to miss the kids the most, but as soon as volunteers can go back to school, I’ll be there as a nan, and not a teacher.”

Teaching has been such a huge part of her life with lots of beautiful memories, but the school’s 50th anniversary and the mini relays for life are two that stand out for her. Combining two of her other loves in life, she made a huge mosaic for the 50th anniversary with every child in the school putting a tile on it, and had 40 kids doing a dancing routine.

She was also instrumental in starting a mini relay for life at Parkes East to give the students the opportunity to take part in the event. 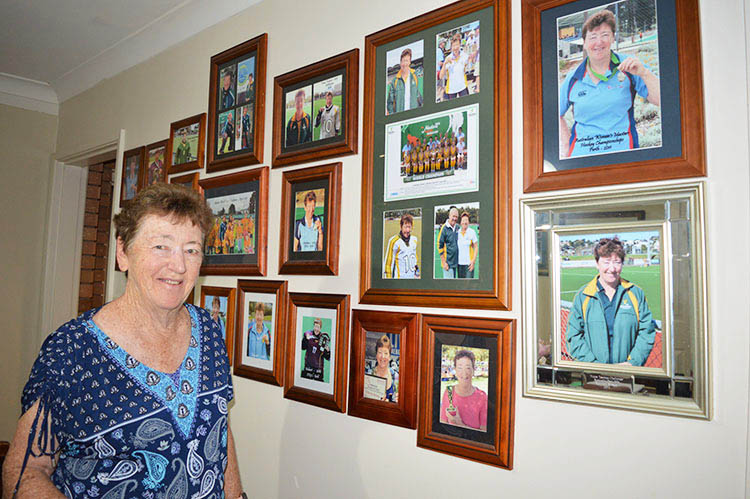 Maureen Massey at a hockey photo wall in her house.

“The community support was just unbelievable. We raised about $4,000 the first time we organised it.”

Having survived two bouts of breast cancer and a melanoma herself, fundraising for cancer is another of Maureen’s passions and the mini relays became an event very close to her heart.

“I’m not retiring because of my health, I just felt it was time to bring some flexibility into my life. I’m so grateful that I can retire in good health to enjoy more gardening, making mosaics and crafty things, photography, watching my grandkids play sport and spending time with my family. I just want to be Nanny Maudie.”

Being Nanny Maudie means you still play A grade and B grade hockey with your grandkids in the same team. Hockey has played a massive role in Maureen’s life from the day she started to play when she was about nine in Peak Hill.

She was back on the hockey field three weeks after the birth of her third child, and it was once again hockey that brought some normality into her life after her first diagnosis of breast cancer at age 37. “The tears just rolled down my cheeks the first time I hit that ball after my mastectomy.”

Maureen has gone on to be selected for the NSW Masters team ten times, and has represented Australia since 2012 having won two gold medals and a bronze at three World Cup events. While COVID has derailed some overseas tournaments, Maureen is all fired up to go to the NSW state selection in Newcastle in June. “The moment you stop is when you start wondering about your future.”

Another hat Maureen has been wearing with great success is managing the Parkes Boppers Dance Troupe. “We started with a group of six dancers and it has grown to 18 with them performing five 30-minute sessions at the Parkes Leagues Club at the last festival. We will have to see what happens next year, but I know the kids are still very keen.”

She has always given everything she’s done her best. “I’ve been very fortunate with a lot of things in my life,” says the busy lady who had the special honour of being part of the Olympic and Commonwealth torch relays in 2000 and 2018 respectively.

“What you put in, you get out. I’ve had a beautiful life.”