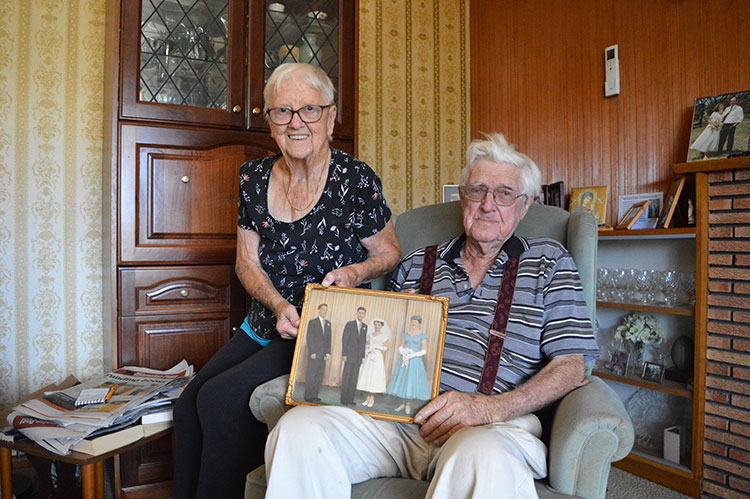 Ann (89) and Laurie (90) Jamieson with their wedding photo taken on 10th March 1956. The best man, Brian Donnelly, was a friend of Laurie and the bridesmaid, Judith Morgan (O’Malley) is Ann’s cousin.

Their match up started with a meeting on the tennis court and last week Laurie and Ann Jamieson celebrated their 65th wedding anniversary.

“It was a private tennis court located where the car wash is today,” recalls Ann smiling at Laurie sitting across from her in their Parkes home where they’ve lived since 1979.

They moved to their Middleton Street house after 24 years on the farm at Brol-gan. “I never thought I would marry a farmer,” said Ann, who grew up in Parkes and qualified as a dental nurse after school.

“Within the first two years on the farm we had a drought and a flood,” said Ann who gave up her job to help Laurie work on the land.

“I miss the animals, especially my pet pig called Erk, the quietness and our neighbours. It was a good place to bring up our daughter Helen.” Memories of getting bogged on their way to the ball, and trying to drive a truck still makes her laugh.

Her fondest memory is when Helen came into their lives. “She is a wonderful person and we are very lucky to have her nearby in Orange.” Helen worked as a journalist at the Sydney Morning Herald before moving with her journalist husband and two children to Orange.

As for Ann and Laurie’s secret to their enduring marriage – Ann says it is all about helping each other in any way you can, doing things together that you both enjoy and treating each other as equals. Laurie says ‘no comment’ with some mischief in his eyes.

When Ann was diagnosed with a rare cancer 20 years ago, it was Laurie who stepped up and cared for her. “The doctor calls my recovery a miracle. I think it also helped that I was doing so much sport all my life.”

As in a tennis match, they take turns to ‘serve’ and it’s Laurie who spoils her with breakfast every morning at the moment.