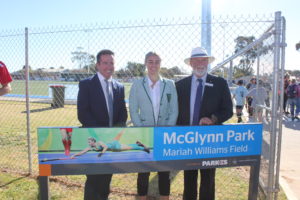 Not many 23-year-olds have a facility named after them, but last Saturday the privilege befell Parkes’ international hockey star Mariah Williams when the second synthetic hockey turf was named in her honour. “I could not think of anyone more worthy,” said Parkes Hockey Inc Executive Director, Aaron Huppatz.

NSW Minister for Racing Paul Toole congratulated the club and Parkes Shire Council on the fantastic facility and the number of tournaments it had already attracted that support the local economy. “Mariah is an incredibly talented young woman. She is a product of this region and every time she plays Parkes and the whole Central West follow her.”

For the Parkes Mayor the naming of the field signified a great day for the community and for hockey. “We are standing on the shoulders of giants here today with many life members also in attendance. Mariah is an inspiration to all junior players who might be dreaming of being an Olympian one day too.”

Mariah responded to all the accolades saying she was very honoured. “There is a lot of history here as I grew up only 100m away from the fields and spent so much time here.” She said although she had lived in many different places, she would always call Parkes home.

The synthetic turf was jointly funded by the NSW Government’s ClubGrants Program, Parkes Shire Council and Parkes Hockey Inc totalling over $1.5M. The international standard surfaces available in Parkes had attracted three major hockey tournaments so far this year, with another three big events booked for next year.