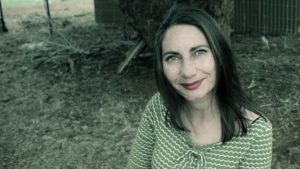 Having to write an original horror script of seven pages or less within 48 hours might sound like a nightmare to many, but for former Parkes Phoenix journalist Raen Fraser it was a thrill.

Winning the top prize at the Tasmanian Gothic Short Script Challenge for Best Australian Script from over 100 entries transformed the challenge into pure joy. “I was thrilled to have been selected as Best Australian Script – I already felt like I’d won just by finishing,” said Raen, who works in communications at the Parkes Shire Council and also on a fantasy novel for teenagers.

“I have not really done horror before, it is not my usual genre.” Raen’s winning script is titled As The Crow Flies and tells the story of a mother and daughter implicated in a mystery when they realise an injured bird holds secrets about a missing child.

“The idea came up years ago when I worked for WIRES and had to deal with some aviary escapees. It turned out tame cockatoos who had escaped would teach wild birds to ‘speak’ English and you’d find talking birds out in really
remote areas.”

The annual competition, based in Tasmania, is open to writers worldwide and encourages original horror storytelling. Hosted by Stranger With My Face International Film festival, the unique event asks participants to write a new horror script with three unique prompts: a line of dialogue, a character and an object had to be incorporated into their, inspiring idiosyncratic results.

Raen said her experience as a journalist working to strict deadlines and word counts served her well in sticking to the 48-hour deadline and seven-page length. Although she has doubts that her script would ever be turned into a movie, she said the competition offered a great platform for emerging screen writers to refine their skills.

“It can be really hard to get your work out there.” While writing her first horror story brought so much reward, Raen is happy to return to her fantasy novel with the hope the end result would not be all make-believe.