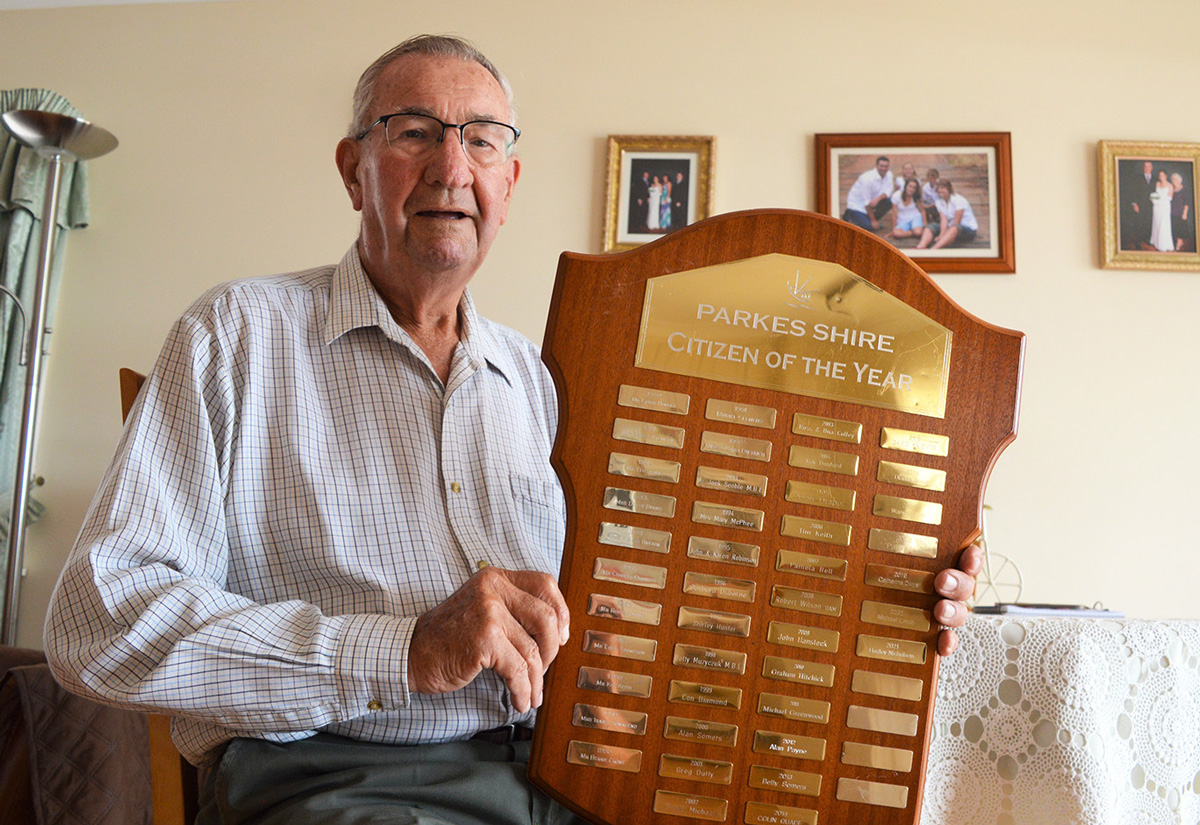 A LIFE OF VOLUNTEERING… Hedley Nicholson’s name was added to the Citizen of the Year Shield this year for giving his time selflessly to the Parkes community for more than 50 years.

“I like doing things for other people,” says Hedley Nicholson, who received the Citizen of the Year award at this year’s Australia Day celebrations for giving his time selflessly to the Parkes community for more than 50 years.

“I was orphaned at 13 and got looked after by lots of people. I helped at the dairy farm in Woodward Street where the steelworks are today, minding the cows and feeding them, and they fed me.”

Hedley said he started to return the favours and wherever he went he did voluntary work. “It was just one of those things.”

His kindness has resulted in several awards, including an Order of Australia Medal (OAM) in 2013, and a Tennis NSW 2018 Volunteer Achievement Award. He missed out previously on the Citizen of the Year award, and said he was very pleased to get it this year. “I didn’t do the volunteer work to get awards or anything, but it feels good to be recognised for doing a good job.”

His love of tennis started early when the Marist Brothers School he attended built a court when he was about ten. “I was never really much good, but enjoyed it all my life.” His passion is still strong with he and his wife Pauline staying up until 1:15am on Monday to watch Nadal win his record 21st grand slam title at Australian Open.

Hedley’s involvement with the Parkes Tennis Club took a serious turn when his daughter Helen became very keen on tennis. “There were always jobs that had to be done from mowing, spraying weeds, fencing, cleaning, painting through to building new courts.”

Hedley ended up dedicating more than half of his life to the Parkes Tennis Club, undertaking president and vice-president roles as well as a committee member. His volunteer work, averaging 15 to 20 hours per week since 1978, equates to more than $1 million.

He did a lot of this work in between his duties as senior train driver, mainly of the 3801, the flagship of the NSW Railways, which makes him very proud. “Back in the 60s thousands of people travelled by train,” said Hedley.

Two years ago, the former train driver of 47 years, decided it was time to hand over his tennis club duties. His new passion is supporting the Parkes Men’s Shed where he has been vice-president since its inception in 2005. “It is unbelievable how good it is for men to get together and talk about the weather, the harvest, the price of bulls and sheep.”

Turning 82 on 21st March, Hedley is looking forward to volunteering at this year’s Elvis Festival. He has the special job of starting the parade, and he and Pauline will be celebrating 60 years of marriage on 21st April… just in time for the popular renewing of vows ceremony!