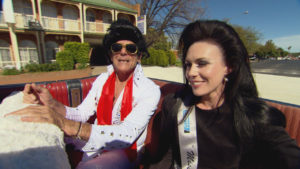 “This is five days of hip-swivelling, lip-curling, collar flicking tributes to the King of Rock and Roll.” Former international cricketer Mike Whitney from the national Sydney Weekender travel show zoomed in on the Parkes Elvis Festival on last Sunday’s program.

“Great advertisement for Parkes. I loved seeing my daughter Kasie serving Mike the Elvis Burger,” said Michelle Ferguson. Other residents also felt it was great for the town, but said more footage of the actual festival should have been used to show the crowds everywhere.