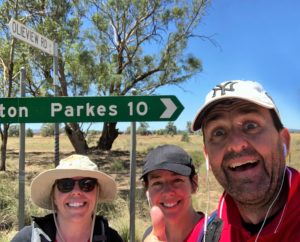 A Parkes couple have set themselves a mammoth task in honour of their two sons living with cystic fibrosis (CF).
Helen and Corey Rowbotham’s sons Callum (10) and Harrison (7) are living with CF, an incurable, life-limiting genetic condition.

To honour their boys and give back to the CF community, Helen and Corey created Team Callum and Harry and plan to walk 65km on 23rd February at Sydney’s Iron Cove to help raise funds to support Cystic Fibrosis Community Care (CFCC) and the Children’s Hospital at Westmead.

“When we put the call out to family and friends to join our team, we did not expect anyone else to be this crazy! Now we have a fabulous team of eight,” said Helen. “Callum and Harry really wanted to walk with us but we thought it was too far so instead their school held a Crazy Hair Day fundraiser this week,” said Helen.

CF causes an abnormal build-up of thick and sticky mucus in the lungs, airways and digestive system. The mucus traps bacteria that cause irreversible lung damage, with lung failure being the major cause of death.

To support Team Callum and Harry go to https://65k2019.everydayhero.com/au/team-callum-and-harry