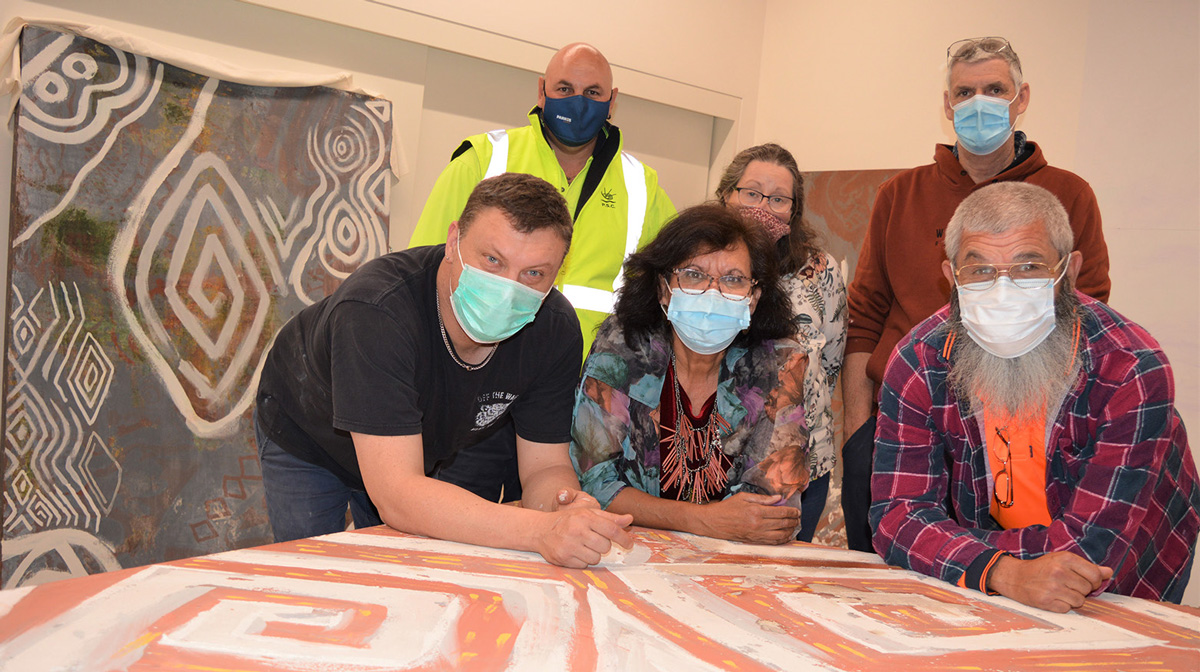 NATURAL ART… First nation artists helped with the development of the permanent Wiradjuri Ngurambang exhibition for the Parkes Library and Cultural Centre last week at a special workshop. At the back are Glenn Sloane, Ronda Sharpe and Geoff Anderson. In front are Sean James Cassidy (facilitator), Irene Ridgeway and Scott ‘Sauce’ Towney (facilitator).

Looking at the trails of insects on wood was one of the ways nature was invited into the Marramarra Makerspace Studio last week when first nation artists worked with facilitators on the development of a permanent Wiradjuri exhibition at the Parkes Library and Cultural Centre.

The Wiradjuri Ngurambang Exhibition project will establish a permanent exhibition in the foyer of the centre to educate the Parkes Shire community and visitors about the Wiradjuri history of the area.

Professional curator Margot Jolly is guiding the development of the exhibition, and artists Sean James Cassidy and Scott ‘Sauce’ Towney co-facilitated the workshop designed by Sean. The curatorium of four artists included Glenn Sloane, Geoffrey Anderson, Ronda Sharpe and Irene Ridge-way, while Robert Clegg was involved in the initiation of the process.

Using the concepts of ephemeral art and the philosophy of tribal consciousness, the group created patterns using natural materials to help bring words to life in the exhibition. The different mediums used to create the ephemeral art included clay, sand, crystal rock and wood.

Each of the artists took turns adding to patterns using the mediums. Sean said the natural materials helped to evoke imagery that would be used in the graphic design of the exhibition. As the ephemeral art created with the natural materials was not permanent, it was photographed to record it.

Sean, through Ub Ubbo Exchange, and Jacqui Clarke will use the patterns to create graphic designs for the exhibition.

“It was a really good day, and the different mediums brought out different emotions. I think I’ve found a new love for words,” said Sean, who has done a lot of work with different groups on presenting traditional designs and art through Ub Ubbo Exchange.

“This is such an exciting project,” said Margot. She explained that the exhibition also included an audio-visual component to add another layer to it that would speak about parts of culture that are not represented by 3D objects. “It will help people to hear and see language,” said Margot.

The exhibition has been approved by the Parkes Elders and Aboriginal Advisory Committee.

The Henry Parkes Museum is contributing objects to the exhibition, which will display a number of artefacts and interpretation panels. The artefacts will include hunting and sustainable agriculture objects, food gathering objects, ceremonial objects and cultural and language examples.

The exhibition is expected to be completed by the end of the year, while the audio-visual component will take a bit longer.

The exhibition has received $35,000 of funding under the NSW Government’s Local Roads and Community Infrastructure Program, while the Wiradjuri Digital Project received $13,000 under the Museum and Galleries of NSW Let’s Get Digital Grant.