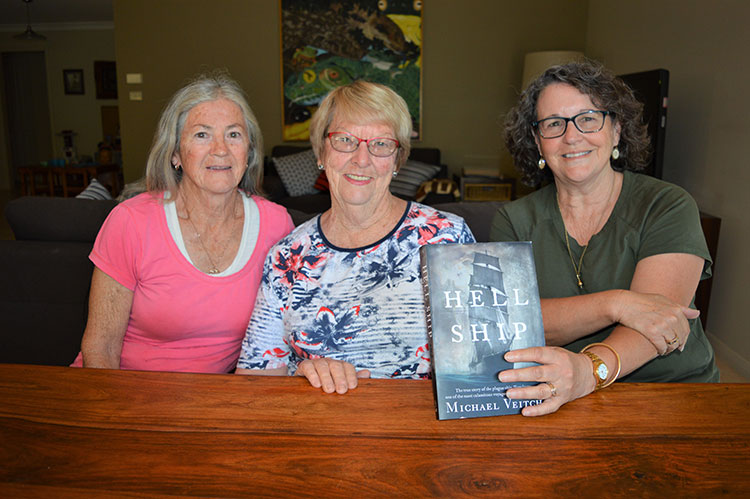 Cousins Denise Hando, Judy Barter and Janine Hando are passionate about family history, and they have quite a story to tell.

A survivor of one of the most calamitous voyages in Australian history has many descendants living in the Parkes Shire.

Henry Hando was only ten when he boarded the Ticonderoga, which became known as the plague ship or ghost ship, with his family in August 1852 in Liverpool.

The non-stop passage of three months on board the beautiful double-decker clipper ship with its tall masts was supposed to be ideal in every way for the more than 800 free settlers seeking a new life in Australia.

The ghost ship that crept into Port Phillip Bay in November 1852 flying the dreaded yellow flag of contagion told a very different story of a horrific voyage with deadly typhus erupting on board killing a quarter of the passengers and leaving many more desperately ill.

The story begins with the discovery of gold in NSW in 1851. Workers in the towns and on the pastoral properties in Victoria went north to the goldfields in their thousands leaving a shortage of labourers.

The 643 Scottish, 140 English and 14 Irish passengers on board the Ticonderoga were emigrating in response to the urgent call for farm hands.

“The Hando family of seven were one of several English families travelling from Somerset, a rural part of England that produced exactly the sort of skilled agricultural worker so sorely needed in Australia,” wrote Australian author, actor and broadcaster Michael Veitch in his book Hell Ship. His great-great-grandfather, Dr James William Henry Veitch, was the ship’s surgeon.

After about a month on board, typhus, spread by lice, was raging through the ship causing havoc. Cleaning became impossible, food was no longer prepared, toilets remained uncleaned and the nauseating stench of typhus was everywhere.

Deaths and funerals became daily occurrences with the burials at sea traumatic experiences for the passengers seeing sharks following the ship. The bodies of babies and children were thrown overboard at night.

Anna Maria Hando at 16 was the first of her family to fall ill, and she died onboard, followed by her mother.

The rest of the Hando family survived the 90 days at sea, but the father and little four year-old Emma died in quarantine on land. Henry and his two older brothers of 17 and 18 were left orphaned.

Henry was the great-great-grandfather of Janine Hando, and great grandfather of her two cousins Denise Hando and Judy (Hando) Barter of Parkes.

Denise started researching her family history about ten years ago. Her grandad (Henry’s son) moved to NSW to farm and was allotted a property called Rosewood near Tomingley. William Daniel, or Bill as he is called, started the oldest trotting stud in Australia.

When Michael Veitch performed a oneman play of his book Hell Ship in Canberra in March this year, the three cousins made sure not to miss the show and meet Michael afterwards.

Janine hopes to bring Michael to the Parkes Library for a book talk once COVID regulations allow it. As a member of the Eugowra Evening VIEW Club, she recently gave a talk on the book and her family connection at a club meeting.

As the Hando family ended up in Australia all because of gold, it seems like gold will be ending another sad chapter in the family history.

Gold has been found on the family farm at Tomingley currently run by Denise’s brother, and he has been given notice to leave as mining would start in the next couple of years.