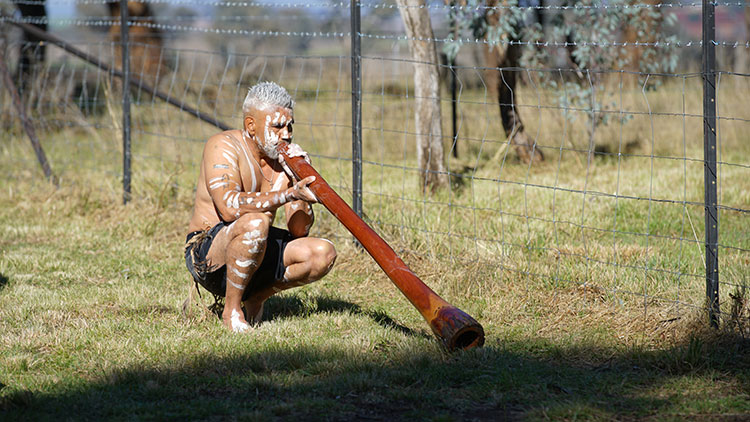 The ceremony to mark the return of the remains of an Aboriginal ancestor to country near Orange on Monday included a procession, smoking, burial and dance. (Photo: Heritage NSW/Paul Milazzo)

The remains of an Aboriginal ancestor were buried at a traditional ceremony in Garra near Orange on Monday following their repatriation to the local community.

The remains were buried after an emotional repatriation ceremony which included a procession, smoking, burial and dance. This ceremony was to mark the return of remains to country, under the Heritage NSW Repatriation Program with Orange Local Aboriginal Land Council and the Central Tablelands Local Land Services.

Details about the remains are unknown, apart from the gender and origin: the Ancestor comes from the Orange-Molong area and is female.

“It was about 2014 when I first found out about the burial site – it’s on a Travelling Stock Reserve so it took a lot of research, mapping and then preserving and protecting to make sure we could rebury the remains,” Greg said.

“It’s important to bring those remains home so the ancestor can rest, but also for our elders to be able to recognise the occasion and to educate the Aboriginal community and wider community too, about the tough historical events our ancestors went through.”

Heritage NSW assisted the local community to bring the remains back to Garra through their repatriation program.

“It’s a challenging process to bring back ancestral remains and objects that have been removed from their communities and stored in collections across Australia and in other countries worldwide,” Heritage NSW Principal Heritage Program Officer John Duggan said.

“But it is an honour for Heritage NSW to support the local community in their efforts, as it is through the repatriation process that we can help return Aboriginal ancestors to their rightful resting places.”

More information about the Heritage NSW repatriation program is available at www.heritage.nsw.gov.au/