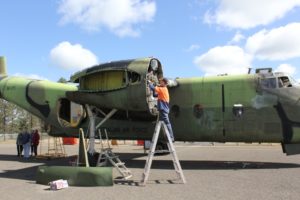 A Vietnam-era Caribou has joined the ranks at the Parkes Aircraft Museum, which is run by the Historical Aircraft Restoration Society (HARS). The Caribou provided essential service as a troop and cargo carrier during the Vietnam War. The aircraft is famed for its short takeoff and landing capability, which enabled it to access short and rugged airstrips, earning it the nickname the “Great Green Gravel Truck”.

Despite its high-flying career the retired Caribou arrived at its new base at Parkes Regional Airport by road, and was partially disassembled to make the journey. The wings and engines were removed to reduce its 29 metre wingspan to a more manoeuvrable 8.8 metres. HARS volunteers are busily restoring the Caribou to its former glory.

Vietnam War veterans from Parkes visited the aircraft last Thursday after the 50th commemoration of the Battle of Long Tan in Vietnam where 17 Australians were killed. The Parkes Aircraft Museum is a satellite museum of HARS based at the Illawarra Regional Airport at Albion Park where there are over 40 aircraft on display. These range from a Tiger Moth to an ex Qantas Boeing 747.

HARS has had a storage facility at Parkes since 1976, and about two years ago converted the historical World War 2 hangar into a museum building. Mike De La Hunty of HARS welcomed new members saying it is a great opportunity for anyone interested in aeronautical engineering to get involved with planes.