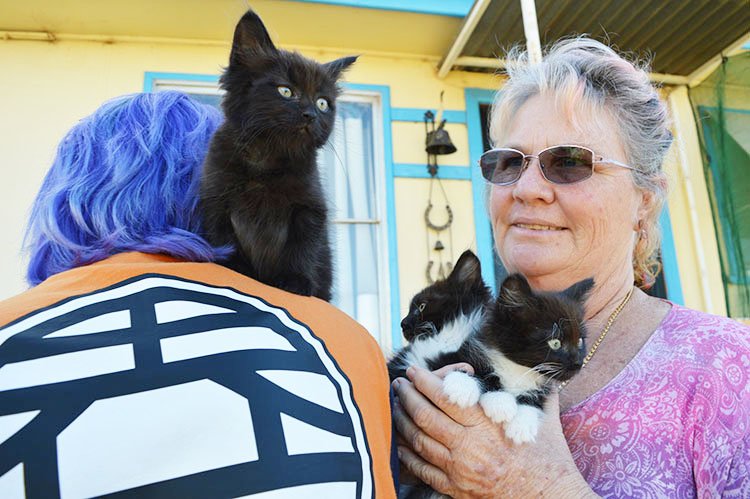 Debbie Horder with some of the kittens she is looking after at the moment.

Spring is a time of renewal, beautiful flowers and lots of cute little baby animals.

The sad reality is that many households end up with unwanted litters of kittens and many of them end up being dumped on the side of the road, in a paddock or left at the pound.

Debbie Horder, who ran a pet shelter in Western Australia, saw an opportunity when she moved to Parkes some years ago and decided to help abandoned animals.

She takes in any animal that needs help, but mostly looks after kittens. She works with Pet Rescue, Australia’s largest online pet adoption platform, and Pets Haven, a pro-life animal shelter in Victoria.

She is also affiliated with the vets in Parkes and Forbes, and she works with the Parkes pound.

“I usually take in animals for about four weeks to get to know them. That helps me to find the best fit from the applications I had received from people wishing to adopt a pet. I can get up to 40 applications per kitten.”

All the animals she gives up for adoption have been desexed, vaccinated, treated for fleas and registered and the new owner pays $350 to cover the vet costs.

She said she had 15 kittens over the past two months. “We have a huge feral problem in town, and unfortunately there is a high occurrence of feline aids and leukemia among them.”

Debbie said it would be fantastic if Council could organise a cheap desex day for pet owners. “Something similar to the free microchip day. It would mean a lot less abandoned kittens in town as a female cat can have three litters per year with four or more kittens per litter.

Make sure to contact Debbie on debhorder@gmail.com if you need to rehome a pet or are looking at adopting.