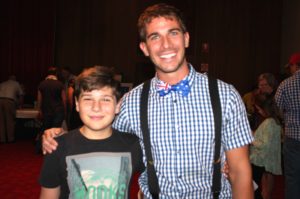 More than 200 people were part of a very special and inspiring afternoon in Parkes last Saturday at the Celebrating Neurodiversity event. People came from as far as Sydney and Leeton to listen to Chris Ulmer from the USA and Tim and Judy Sharp from Brisbane. Judy told the incredible story of how she was told to put her son away and forget about him when he was diagnosed with autism at age 3. “I was told he would never be able to love me and he would never speak. I was devastated, but in the car Tim was wiping my tears away.”

Judy never gave up on her son. She recalls a huge breakthrough when out of desperation to communicate with Tim, she started drawing stick figures. “As soon as I put the pencil down, he pushed my hand back to the pencil.” Tim started drawing every day and at 11 invented Laser Beak Man. Today he is an internationally acclaimed
artist with an impressive list of achievements. Judy’s message is that no one can tell the future and therefore all children must have the opportunity to reach their potential.

Chris Ulmer continued the message of love and encouragement with his talk. As a special education teacher he felt he
had stumbled down a rabbit hole and discovered a world that was beautiful after he had spent three years with the same students. He started a blog posting videos of his students explaining life from their perspective. When a video of him complimenting each student individually at the start of the day went viral, he knew this was the way to spearhead worldwide acceptance of neurodiversity. He is currently travelling the world to teach and interview
neurodiverse individuals for his blog called Special Books by Special Kids. Chris always focuses on the positive in
people and told the story of how he helped a student who could not run more then three steps without falling down to eventually finish a 5km run in 22 minutes. “Every day we celebrated the number of steps he managed to do without falling, but not once did I say a word about him falling down.”

Chris, who did eight interviews in Parkes, encourages everyone to like the videos as he firmly believes this would change the way individuals with a diagnosis are perceived in the community. One of the organisers of the event, Angela Wilson of the Central West Autism and Special Needs Support Group said the feedback had been incredible. The group’s Facebook page was flooded with messages of people saying how much the afternoon had meant to them.