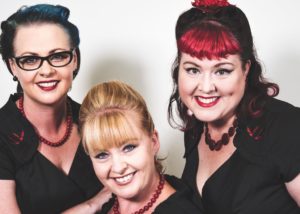 It’s not often that you are given an opportunity of a lifetime twice, but local vocal trio Amitie are once again preparing for this year’s Rock The Boat cruise. The ladies were both thrilled and extremely proud to be asked by the promotors to return this year as part of the entertainment line up on Rock The Boat 6. “We worked very hard in the lead up to last year’s cruise and we received some amazing feedback from both the audience and the other artists,”
said the trio.

Christie, Shev and Christa have been in rehearsal mode for over three months, meeting weekly in a backyard shed, fine tuning their performance as well as adding in new material to go with this year’s cruise theme. Rock The Boat 6: A Salute to the Sixties, sails on 6th November from Brisbane on Royal Caribbean’s cruise ship Legend of the Seas. A seven night Rock ‘n Roll festival on the South Pacific stopping at the glorious Isle of Pines and Lifou along the way. This year’s cruise boasts the biggest international lineup of headline artists ever assembled on Rock The Boat. These legendary acts from the UK and USA, come from what many consider to be the golden age of Rock ‘n Roll. Acts include Chubby Checker, Gary Puckett and The Union Gap, The Fortunes, The Searchers, The Troggs, Brian Poole and Chip Hawkes, P J Proby, Badfinger, and The Pacemakers – all hosted by Glenn A Baker.

Amitie will perform daily throughout the cruise in various venues around the ship. When not performing they are treated as guests. Once Amitie return to Parkes they will go straight into preparations for the 2017 Elvis Festival. They will be performing throughout the festival period. Follow Amitie on Facebook for details.
By Shevaun Brown