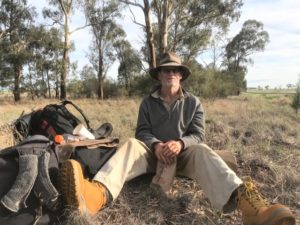 John, the Highwayman, passed through Parkes this week carrying his huge swag, heading west for Condobolin. John left his job and decided to backpack around Australia in 1977 living off the land. He has been walking the highways and byways ever since – with no plans to end his journey. “There used to be a lot more swagmen around back then,” said John who has become a rarity in today’s modern world.

Some people think he’s an icon, an Aussie legend, but John shrugs his shoulders at the thought, “I’m just me.” The freedom of John’s lifestyle means no commitments, no deadlines, no stresses of modern life. John plans his route from town to town. “But I don’t always stick to it. Don’t have to.”

He goes where he wants when he wants. There’s no exact routine to his day. He packs up and walks when he feels ready. He stops when he feels like it. John has no favourite season, though he does like the longer daylight of summer, and deals with the weather as it comes. “Sometimes on frosty mornings I can’t feel my fingers and toes for a while, but I just get up and shake the ice off. In rain or duststorms I pull the tarp over me and shelter in the trees.”

John lost touch with his family for 20 years, but is now reunited. He calls his 89-year-old mother in Ballarat and sometimes spends Christmas with his sister in Victoria. These days John has supporters with a Facebook page who provide him with his basic needs, such as his new boots which make him feel a bit taller after his old down-at-heel pair. Loneliness has never troubled John, but he’s happy to have a chat with whoever comes by. So, if you’re heading
out Condo way, pack an extra sandwich and a coffee for John and pull up for a yarn.