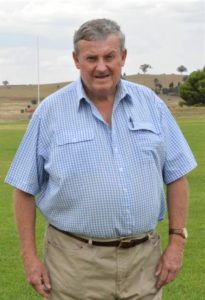 Parkes’ cricket stalwart Greg Morrissey has received an OAM (Medal of the Order of Australia) in recognition of his years of service to cricket and the Parkes community on Australia Day last week. Greg was honoured locally in July 2016 when the Greg Morrissey Field at McGlynn Park was officially named after him.

Some of his achievements and involvement with cricket include: Australian Sports Medal in 2000 for contributions to cricket and school sport, Lloyd Westcott Award 1995/96 for outstanding services to cricket, Duncan MacDonald Shield for services to cricket in 2010/11, Western Zone Volunteer of Year 2006 at Cricket NSW Steve Waugh Medal evening in Sydney, Western Zone Cricket Volunteer of Year Award 2010, level one accreditation in 1988, level two accreditation in 1990, passed cricket umpires examination to become a member of NSW Cricket Umpires and Scorers Association in 1993, life membership of Western PSSA in 1999 and life member of Lachlan PSSA in 2010.