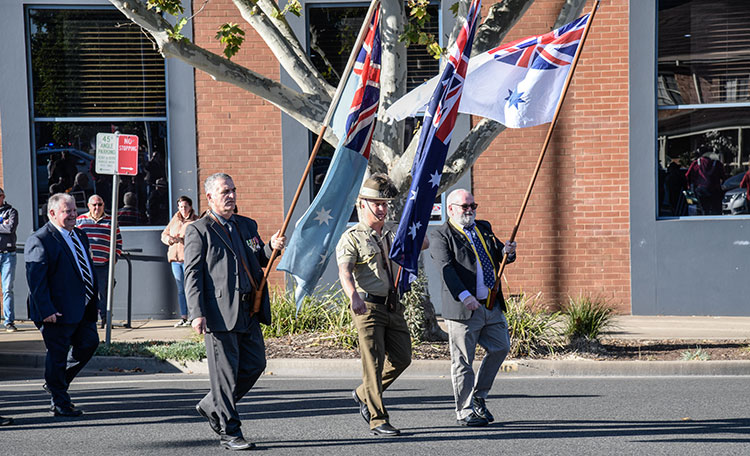 Leading the Anzac march on Sunday were (L-R) ex-serviceman Darren Fisher, Sgt Craig Cole who is currently serving in the Australian Army Armoured Corp, and ex-Navy representative Roy Matthews. They represented the three arms of the Australian Defence Force.

The rest of the Anzac Day program was also highly successful with the biggest crowds ever showing up at both the Dawn Service and the march and commemorative service in Cooke Park. “There were about 1,800 people at Memorial Hill, and about the same number again in Cooke Park,” said Paul Thomas, commending the participation of the schools.

The highlight of the day was the flyover of a C-130J Hercules at 10am in celebration of the Royal Australian Air Force (RAAF) centenary that coincided with Anzac Day.

Special guest Air Vice Marshall Leigh Gordon, who completed his schooling in Parkes, returned to his alma mater to meet with students as part of his program and delivered the special address on Sunday.

Geoff Stokes once again played the bagpipes, as he has for many years on Anzac Day in Parkes, and the Parkes Shire Concert Band led the march.