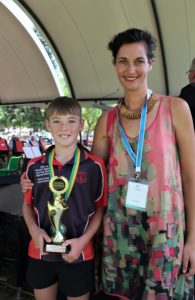 Senior Sportsperson or Team: Troy Dickson (water skiing). He broke records in New Zealand’s Bridge to Bridge, and
is currently the world record holder for that distance. Placed second in the Australian National Championships with a broken foot; third in the Australian National Championships; first in the ACT/NSW Country Masters speed ramp;
third at the Catalina Classic Long Beach California 3rd Skier Masters, and is the NSW State Champion in the Masters
Marathon division.

Referee, Umpire or Official of the Year: Carlton Magill. Carlton officiated locally, in Premier League and at State
and National level for school sports and at the national schools championships in South Australia.

Long Service and Dedication in Sport: Greg Duffy (OAM). In recognition of Greg’s more than 30 years on the
Parkes Sports Council and his contribution to cricket.