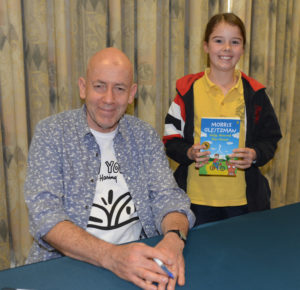 “Our imaginations can take us anywhere we want to be.” Morris Gleitzman, bestselling Australian children’s author and Australian Children’s Laureate for 2018-2019, was at the Parkes Library on Wednesday as part of a seven week schools tour around the country.

He held three sessions for primary and high school students from across the Shire and Forbes sharing stories, anecdotes and secrets of writing. He started off telling them that he used to have a big problem writing the first sentence of a story. “I would sit there for hours, until I discovered the secret to starting a story.”

He read the first sentences of several of his books to illustrate that the main character of any story needs to have a problem. “It needs to be declared in the first or second sentence of the story,” said Morris. Students were enthralled by his energy, passion and sense of humour, and asked many questions. One student even advised him “if he didn’t want to be an author anymore he could be a comedian”.

Home school student Annabelle Border said her favourite thing was his tips for writing. Morris’ books explore serious and sometimes confronting subjects in humorous and unexpected ways. His titles include Two Weeks With The Queen, Grace, Doubting Thomas, Bumface, Give Peas A Chance, Extra Time, Loyal Creatures, Snot Chocolate
and the series Once, Then, Now, After, Soon and Maybe.

His role as the Australian Children’s Laureate is to promote the power of reading to children. Morris’ visit to Parkes was supported by the Charles Sturt University Community- University Partnership Program – Head of Campus Small Grant Program.