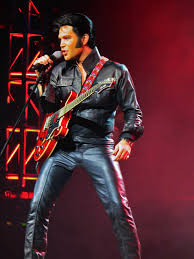 Ted’s portrayal of the King of Rock ‘n’ Roll is one of the top tributes in the world. He acquired this title in Memphis Tennessee in 2011 and 2012 at competitions organised by Elvis Presley Enterprises Inc. “I am very excited about headlining the 2019 Parkes Elvis Festival in Australia, which is the biggest Elvis festival in the world! I am very honoured and look forward to entertaining all the wonderful Elvis fans in Australia!” said Ted.

He is sure to leave fans ‘All Shook Up’ appearing in four highenergy concerts celebrating Elvis Presley’s music at the Parkes Leagues Club over the next four days. He will be backed by a dynamic live Elvis band to recreate the performances that made Elvis Presley the one and only King of Rock ‘n’ Roll.

In addition to the feature concert series, Ted will appear at the 2019 Parkes Elvis Festival Street Parade, gospel service and Renewal of Vows Ceremony. Ted is one of the top tribute artists in the world, and has toured the United States, Germany, Austria, Hong Kong, Japan and Singapore.

Other accolades include 2016 ‘Images Of The King’ World Champion; 2016 1st place Fan Favourite at ‘Images of the King’ in Las Vegas; 2014 ‘Heart Of The King’ Award; and 2014 Vocalist for the soundtrack of the Elvis-based independent short film ‘Nobody’.

Parkes Elvis Festival Director Cathy Treasure said: “Ted has a great reputation for putting on an unforgettable show and we look forward to seeing this when he takes to the stage in Parkes.”