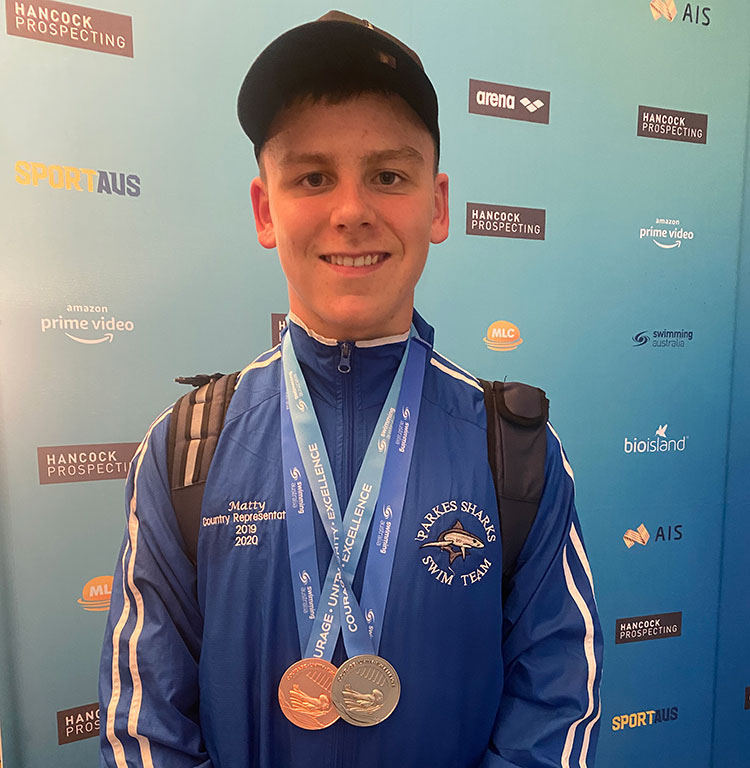 YOUTH OF THE YEAR… Matty Price with the silver and bronze medals he won at the Australian All Age Swimming Championships at the Gold Coast in May.

At 14 years of age Parkes High School star swimmer Matty Price added a vast number of medals to his collection so far this year, and last weekend he added a new accolade.

He received the Youth of the Year award at the NAIDOC celebrations for his swimming achievements and being an inspiring young sports person. Matty was very pleased with the award and took it to school on Tuesday where it will be displayed for the year. He said it felt good to be recognised.

This year alone Matty competed at the Australian All Age Swim-ming Championships at the Gold Coast in May in five events and came home with a silver and bronze in the 100m and 50m breast stroke events.

In May he went to the NSW All School Championships in Sydney competing in five events again. His relay team broke a seven year record in the 200m freestyle event, while he came second in the 50m breast stroke, and third in the 50m and 100m backstroke and 50m fly events.

He also won seven medals in the eight events he competed in at the NSW Combined High School Championships earlier this year.

Next month Matty will go to a talent camp in Canberra on invitation from the Australian Institution of Sport, having competed at the national championships. He is the only swimmer from Parkes to go.