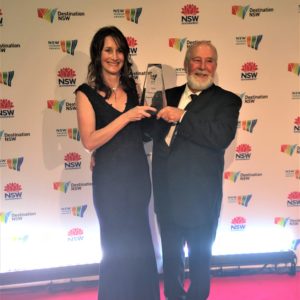 The awards keep on rolling in for the Parkes Shire Council with three received in one week! The Parkes Elvis Festival won gold, an engineering cadet of the Council was awarded a medal and the Council was recognised for operational efficiencies at the Australian Airport Association Industry Awards ceremony.

The Parkes Elvis Festival won its second consecutive Gold Award at the annual NSW Tourism Awards in Sydney last week. The 2017 Festival was named winner of the Festivals and Events category. Festival Director Cathy Treasure said it was a testament to the Festival’s ongoing success and recognition for its contribution to tourism in NSW for the past 25 years.

“It’s exciting for all those involved, especially as we prepare to deliver the 2018 Festival in just six weeks’ time.” Parkes Elvis Festival was one of eight finalists in the Festivals and Events category, taking home the title ahead of the Orange F.O.O.D Week, Canowindra Balloon Challenge, Australian Celtic Festival, Byron Writers Festival, Deni Ute Muster, Eat the Street and Splendour in the Grass.

On an individual level it was a great night for Parkes Shire Council’s engineering cadet Cate Fennell who was awarded the G A Taylor medal for best paper at the Institute of Public Works Engineering Australasia (IPWEA) NSW State Conference. She did a presentation on ‘What makes an Engineer today?’ Cate identified the barriers that limit students from entering a career in engineering and the need to change the way the profession is depicted to school students in order to address the major skills shortage in the industry.

Parkes Shire Council’s General Manager, Kent Boyd said: “Cate is a fantastic role model, not only for young women, but for all youth considering a career in engineering. “Cate strives to break down the barriers that limit young people from entering the industry and challenge the traditional representations of engineers.”

Cate will go on to represent the State at the National IPWEA Conference in 2019. The third award was received at the Australian Airport Association (AAA) Industry Awards ceremony in Adelaide last week when Parkes Shire Council was recognised for achieving excellence within Australia’ airport industry.

Parkes was awarded joint winner in the Airport Innovation and Excellence – Operations category, for its Aerodrome Reporting Officer Network Forum; an initiative established with Dubbo, Orange and Scone. Chair of the Parkes Regional Airport Committee, Parkes Shire Councillor Alan Ward said: “This award recognises the fantastic work of our airport operational staff.” The Aerodrome Reporting Officer Network Forum was established in 2016 to enhance the productivity of the regional airports involved.

The forums are conducted every six months to identify and address challenges experienced in the regional aviation industry, share knowledge, promote professional growth of operational staff, and to ensure a safe environment for airport staff, visitors, passengers, contractors and airlines.