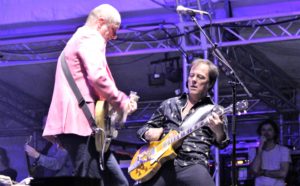 The iconic line-up of Australian greats at the Band Together Farmers concert in Parkes on Saturday delivered a rare experience for the 2,500 strong crowd and left them in high spirits by the end of the night. The crowd in the mosh pit was really living in the moment by the time Mark Seymour and the Undertow followed by the Hoodoo Gurus came on stage with people dancing and singing with passion and conviction.

The fundraising event for the Centre for Rural and Remote Mental Health was also meant to be a day off from all drought worries and concerns. With comments like “the best day ever” and “fantastic event” it seemed to have hit the right spot.

“It was just phenomenal and everyone had such a good time,” said Darren Jones, event director. The artists also loved Parkes and had a ball. “Although it was a hot and dusty day, it highlighted the reality of the drought, and all the comments have only been positive,” said Darren. A highlight for the artists was getting a private tour of The Dish on Saturday morning “which they all raved about”. The other important result of the event was that so much awareness had been raised about mental health. “There were loads of people who spoke to the girls of the digital mental health service Reach Out in the marquee at the concert. Even during the build-up the mental health message was getting a lot of attention,” said Darren.

The stellar cast of seven bands performing from 1:30pm on Saturday saw fans travelling from as far as Queensland, Newcastle, Sydney and all over the Central West. The addition of the RAAF Roulettes had the whole town excited as their spectacular aerial show could be seen all over.

“Thanks for an amazing show, worth the trip from Shellharbour,” said one person. “What a great day,” said another. “We never get anything like that here, and for such a worthy cause. Thank you so much to the organisers and bands for making it possible.

Everywhere I looked, everyone was having a great time! It was the best day I’ve ever had in Parkes.”

Councillor Neil Westcott opened the concert saying what a wonderful event it was for the farmers and the community, while elder Robert Clegg urged people to give farmers a friendly wave when they see them on their land, when he did the welcome to country.