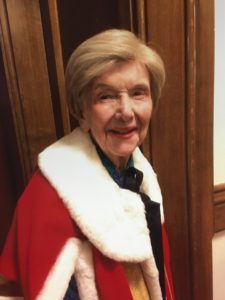 In 2017, one of Parkes’ local treasures celebrated a very special milestone. Baroness Gardner of Parkes marked her 90th birthday in July.

Born in “Sunrise” Parkes in 1927, Rachel “Trixie” Anne Gardner (nee McGirr) was one of nine children to former leader of the NSW Labor Party, the late Hon Gregory McGirr and Rachel McGirr OBE.

The McGirr’s were a strong political family, with Gregory’s younger brother, James McGirr, elected NSW Premier in 1947. In 1981 she was created a life peeress of the United Kingdom as Baroness Gardner of Parkes, and in the State of New South Wales and Commonwealth of Australia – to date, the only Australian woman to be elevated to the peerage.