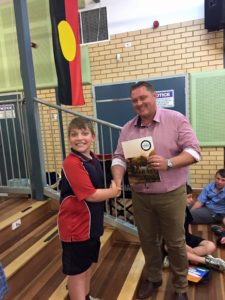 Year 4 students at Parkes Public School raised more than $240 in a Dancing Bear Appeal last week. Funds raised will be donated to World Animal Protection, an organisation at the forefront of the fight to free bears from a life of misery. Students first learned of the issue watching a story on Behind the News (BTN) on ABC3. They then studied a book, The Deliverance of Dancing Bears by Elizabeth Stanley. Students were very moved by the story and decided to take action. They first wrote persuasive texts on Why Dancing Bears Must Be Banned! They found that World Animal
Protection (WAP) was the most reputable organisation. Three of the expositions by students of 4R will be displayed on the Supporters Wall of WAP in Sydney.

Class 4R also asked all primary students to bring in a small donation to help the bears and raised much more than expected.