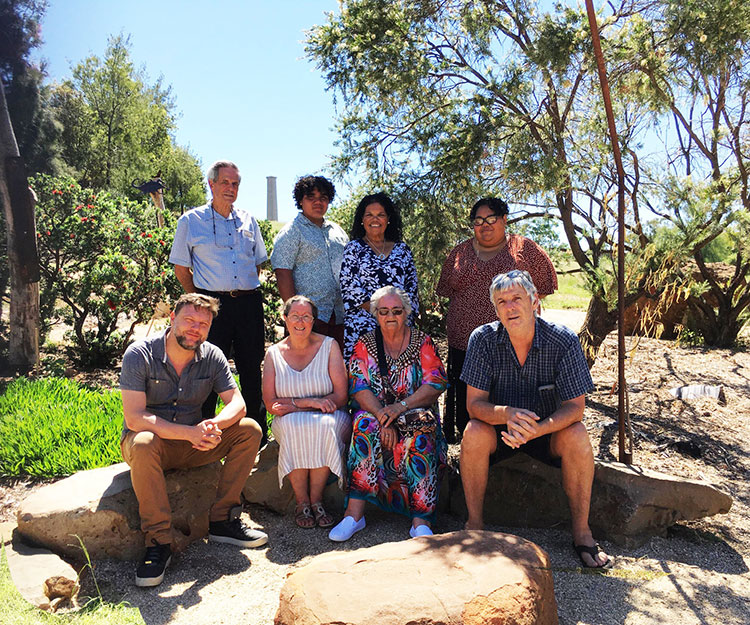 At the celebration of International Mother Language Day in the Garradyang Cultural Garden with the Bushman’s Hill tower in the background. At the back are (L-R) Bruce Hall, Brock Charlton, Kelly Thompson and Iesha Thompson. In front are Sean James Cassidy, Rhonda Sharpe, Pat Oliver and Geoff Anderson.

The Wongalea School hall at the Henry Parkes Museum filled up on Sunday for the presentation of a song on International Mother Language Day on Sunday.

The Parkes Wiradjuri Language Group with Ub Ubbo premiered the video of the song called Nuganirra, which means heartbeat.

It is about going back into the earth and was dedicated to the late Ron Wardrop (first Wiradjuri language teacher in Parkes) and Geoff Anderson’s mother, Alma Anderson.

The project was instigated by Geoff Anderson and Lionel Lovett, and the video is the result of many hours of hard work put in by Sean James Cassidy, Jason Macho Murchie, Tanjim Islam with artwork by Scott Turnbull and Ron Wardrop.

“The Ghalari Lachlan Reconciliation Group is happy to endorse this wonderful production of Nuganirra,” said Eileen Newport. “They have combined Wiradjuri language, music, graphics and performance in a unique presentation. This is their third video using this technique.”

After the launch of the video at the museum, the celebration of the day continued at the new Garradyang Cultural Garden and amphitheatre at Bushman’s Hill to recognise the past history of Parkes in order to continue on the path to reconciliation.

Eileen said that including both venues for the launch of the video was very significant as it was important to recognise past histories, then to move forward together in a spirit of reconciliation. “We need to protect both our indigenous and non-indigenous histories,” said Sean.

President of the Parkes and District Historical Society Bruce Hall expressed his gratitude for being asked to be part of the launch. “It is events like this that bring like-minded people together to make wonderful things happen.”

Sean said the group planned to release three more songs over the next three months, and these would be played on the First Languages Australia website.