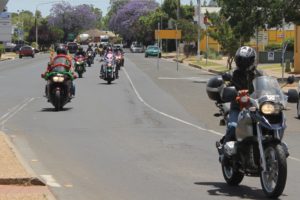 More than a dozen local riders braved the heat and brought their bikes and Christmas goodwill to Bushman’s Dam for the Mid State Motorcycle Club’s very first Toy Run in Parkes last Saturday. Many bikes were sporting tinsel and Christmas decorations, with Neil Brock winning the prize for Best Decorated Bike. The motorcycle fleet rode through town before heading to Bushman’s Dam for a barbeque lunch.

The first ever Toy Run was in the United States in 1973 when 200 Hells Angels escorted two truck loads of toys to the Los Angeles city hall, challenging stereotypes and prejudice along the way. Since then the idea has spread across the world and has become a firmly established Christmas tradition. Australian motorcycle clubs soon adopted the tradition with Toy Runs operating around the country during the mid-1970s. Each year bikers get together to deliver toys, gifts and funds for the Salvation Army Christmas Appeal.

Organiser Kerry Smith has a long history with Toy Runs. This was the 7th event she has coordinated, but she has been riding in Toy Runs since 1979. Kerry said that all toys go to local families. “It’s such a rewarding event,” she said, “and we owe a huge thank you to our sponsors, KicXstart Motorcycles”. The motorcyclists donated brand new toys for the Lachlan Branch of the Salvation Army to distribute to needy families in the Parkes and Forbes areas. This year’s toy donations included giant bubble makers, kid’s tents, sports sets, as well as dolls and trucks.

If you didn’t make it along to the Toy Run, but still want to make a child smile this Christmas, the Parkes and Forbes Salvos stores are accepting donations for the annual Christmas Appeal until Thursday, 15th December, or you can buy Christmas Wishes online at: https://www.my.salvationarmy.org.au/wishes