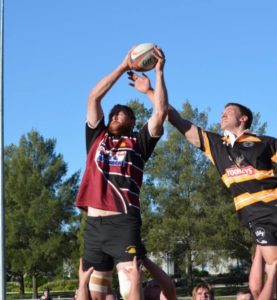 Going into half 5-5, the Boars came out with new energy and vigour. Debutant Hugh Woods put the Boars on the front foot and superb phases of play was rewarded with Karl Oliver crossing over under the posts to make the score 10-5.

CSU scored the equalising try, while Boars’ promising youngster Johan Ruzgas crossed over for his first try of the season, but CSU crossed over at the end, and converted to win 17-15.

1st Grade CSU 25 Parkes 29 With Dan Ryan out for the Boars, Coach Myles opted for the smallest pack to ever take to the field. The size difference upfront seemed to make no difference with Brock Mattocks and Jimmy Lowe making big tackles and burrowing runs. CSU started the scoring with a drop goal. Parkes’ Dylan Hood scored the first try.

CSU answered almost instantaneously, but Parkes refused to let them get away with well taken chances by Jim Sellings and Poncho Nash.

With a forward driving try for Campbell Earsmen, Boars were four points up. A well stolen ball from Ben Ryan and a scrummaging masterclass by Jim Lowe earned the boars a spectacular and well-deserved win.