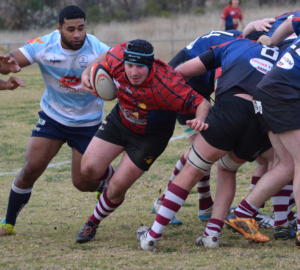 The Parkes Boars lost to Forbes Platypi last Saturday, but the annual fundraiser match was a huge win for CanAssist. The proceeds of a jersey auction, an esky raffle, a collection bucket and half the gate takings raised $6,500 for the charity.

Parkes played a game to be proud of, but Forbes bettered them 47 to Parkes 13. Parkes were the first to strike with Joe Nash just too fast and strong for the Forbes backs. Stung by the early try to Parkes, Forbes lifted and hit back with Matt Coles first of three tries for the day. For most of the first half both teams were evenly matched.

Late in the first half Parkes was in front and there was a faint hope there could be an upset. But just prior to half time two quick tries to Forbes saw them in control at the break 26-13. In the second half Parkes looked good in
patches with the forwards Leo Haviili and Sam Denison making good metres up the centre. Toby Baigent and Scott Chislett were solid as usual and Ash Adams was tireless in attack and defence with his usual brutish – take no prisoners – style. The loss of Captain Israel Symington at half time to a niggling injury was telling for the Parkes
side. Adams was well supported by Ben Ryan at No. 8 and they were terrific at the breakdowns.

Ben Powlay made several attacking runs and seemed to enjoy a bit more space created by Dan Ryan who was playing in the centres, setting up some attacks and combining with Powlay and Josh Miles to close down the Forbes backs. But Forbes was relentless and showed why they are near the top of the ladder.