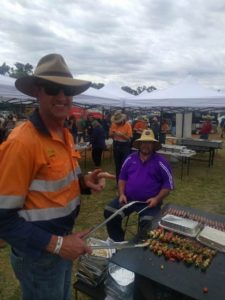 Do you fancy tasting crocodile, kangaroo, emu, buffalo or camel? This is but one of the many rare and unusual experiences a record crowd of over 2, 000 people had at the 31st Trundle Bush Tucker Day last Saturday. People came from all over Australia to sample bush tucker, compete in the bush tucker cooking competition, take part in bush games and displays, attend camp over cooking guru Ranger Nick’s demonstrations or enjoy the live music provided by Beccy Cole and others.

As usual a team of more than 20 volunteers from the Northparkes Mines provided a selection of tasty treats, cooked in the traditional way, to sample for free. The bush games included bushies and junior relays, sheep shearing, billy boiling, whip cracking and dog jumping. This year’s event was well attended after widespread flooding last year that prevented many from attending. Many people commented on how well organised it was and that they would definitely return next year.