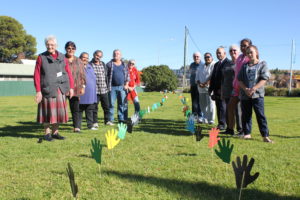 More than 100 hands formed a colourful display for the start of National Reconciliation Week 2017 at the Parkes Visitor Information Centre last Saturday.

“It is all about caring and sharing,” said David Acheson of the Lachlan Reconciliation Group who organised the event.

Two significant anniversaries in Australia’s reconciliation journey are celebrated this year as it is 50 years since the 1967 referendum, and 25 years since the historic Mabo decision.

Councillor Wally Biles shared his personal experience of the 1967 referendum at the event on Saturday. “I grew up on the Brewarrina Mission near Bourke and we were not allowed to leave or move off the mission. If it was not for the referendum I would never have got an education,” said the Police officer, who was elected to council for the first time last year.

The Councillor said although there had been a lot of positive changes, there was still a lot of work to be done. “We should all embrace national reconciliation, make it part of the Council calendar and make sure this celebration happens every year.

The winner of the raffle run by the Lachlan Reconciliation Group was Wiradjuri teacher Loretta Gilbey winning a Wiradjuri diction- ary and grammar book, donated by Uncle Stan Grant.

Adding to the Sea of Hands display made in the Aboriginal and Torres Strait Islander national colours were two art works made by the Parkes Early Childhood Centre and Middleton Preschool on exhibit.

As part of the commemorations, Council is working on an Indigenous art project to go on display throughout the Parkes Shire.

The last event takes place tomorrow at the Parkes Library. Everyone is invited to the launch of an exhibition titled Erratic Symbiosis, Unearthing Past Voices – Sowing Future Visions curated by Sean James Cassidy.