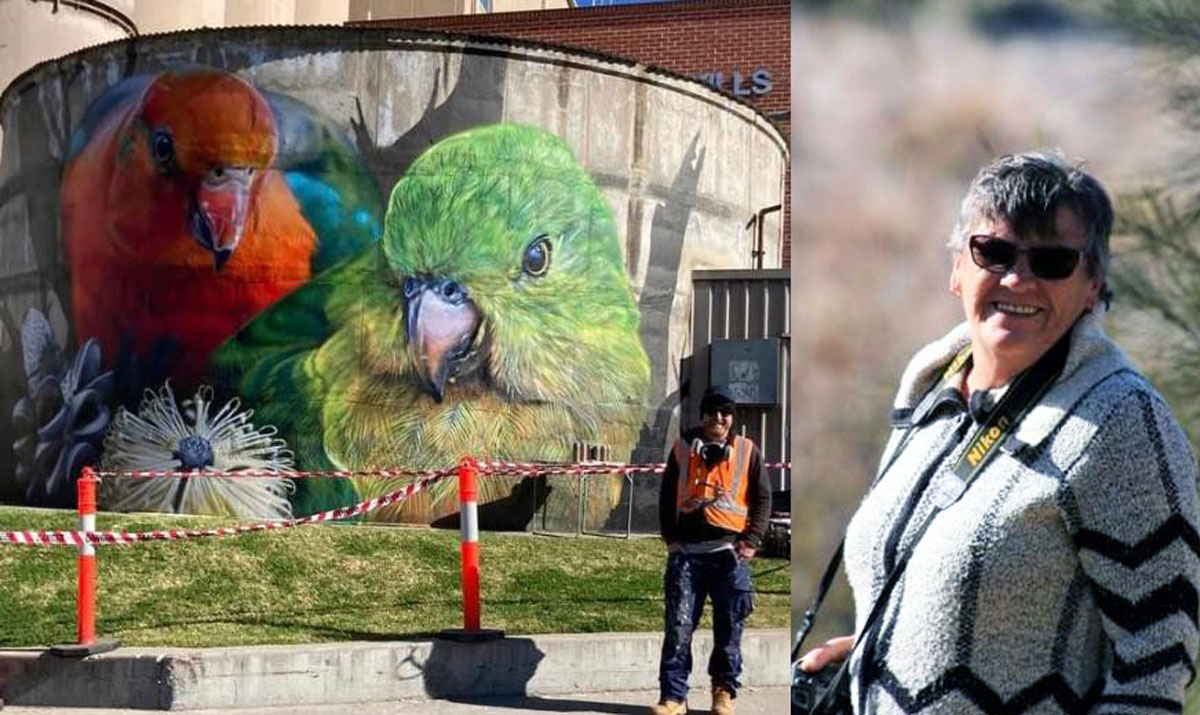 Artist Jimmy Dvate at the mural at the Manildra Flour Mills that he completed using a photo taken by Cathy McPherson from Parkes. Right: Cathy McPherson is an active member of the Parkes Camera Club.

Parkes Camera Club member Cathy McPherson loves taking photos of birds but she never dreamed that her images would end up as giant artworks.

About 18 months ago a friend of Cathy from Manildra, Sue Reynolds, asked her for some wildlife photos of the region. Last week Cathy’s image was turned into an amazing mural on a tank at the Manildra Flour Mills.

If you’ve driven through Manildra over the past week you might have noticed the first mural of Cathy’s king parrot and grass parrot on a tank near the Mandagery Creek Bridge.

Jimmy Dvate, a renowned Australian contemporary artist who specialises in large scale public murals, was commissioned by the Manildra Flour Mills and the first mural he painted was Cathy’s birds. “It looks amazing, I am really thrilled,” said Cathy.

Sue proposed the idea of the murals to the owner of the Flour Mills Dick Honan and he agreed to commission the artist. “I chose Jimmy because his speciality is flora, fauna and wildlife,” said Sue.

Actively painting on the streets of Melbourne since 1997 Jimmy has become synonymous with the graffiti and street art scenes, and his work can now be found all over Australia and the world including Adelaide and Melbourne Zoos, Phillip Island Nature Park, Darwin, Alice Springs, Wollongong and silos at Rochester, Goorambat, Waikerie and Picola.

Sue said another one of Cathy’s photos of a white cockatoo would be part of the second mural that Jimmy is currently working on that also features the historic cement bridge which is going to be replaced.

“I selected images for the designs and submitted a picture board mock up to Jimmy the artist. He refined the pictures and blended them with the background for the final design,” said Sue.

Another two, perhaps three, murals are being planned to be painted around September at the Flour Mills.