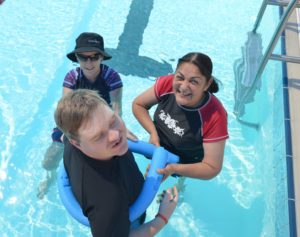 Currajong Disability Services (CDS) took out overall honours in the Western Region Annual Swimming Carnival for the sixth time in seven years at Parkes Swimming Pool recently. The event saw a strong field of 105 entrants from as far afield as Temora and Cowra, the 2017 defending champions. Yet it was Currajong, lead admirably by Ian
“Thorpedo” Kaupke, and Condo CDS representative Tim McDonald who dominated early, with some impressive performances from Jamie Cook also.

“CDS went very well and competed in the right spirit,” said Activity Co-ordinator and carnival organiser, Currajong’s Indigo Kriedemann. “Each year we see fantastic friendships and relationships develop and we were delighted to continue that with the other organisations and clients again this year,” said Indigo.

The carnival, one of the flagship events on the regional calendar, also featured novelty events and a relay. “Everyone had a go, which is all you can ask from competitors to volunteers,” said Indigo.

“We can’t thank everyone enough, especially our CDS volunteers.”