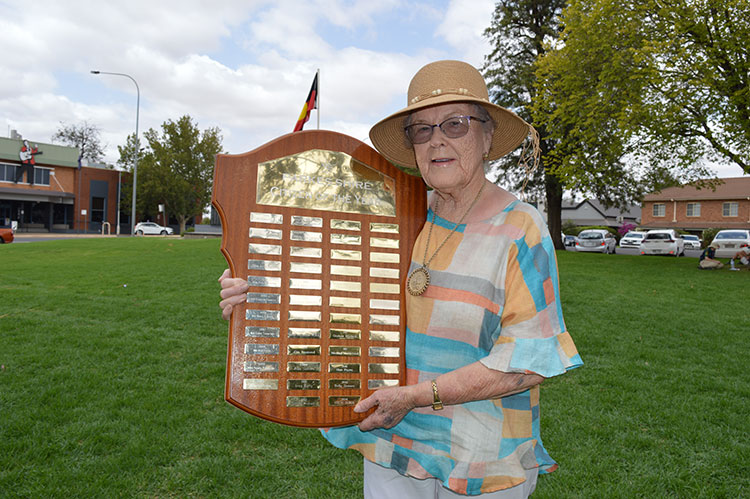 THRILLED AND DELIGHTED… Kitty Dwyer is the 2020 Parkes Citizen of the Year.

“The insidious drought and devastating bushfires have made it a very challenging year for our country, but it has also brought to the fore the Australian ethic of Aussies helping each other to meet adversity together”, said Parkes Shire Mayor Ken Keith OAM.

Speaking at the official Australia Day ceremony in Cooke Park on Sunday, Ken congratulated all the individuals who had contributed to “this wonderful caring and friendly shire”.

Australia Day Ambassador Father Chris Riley, who is the CEO of Youth Off The Streets, commended community members for everything they’ve done for our community and encouraged everyone to do even more.

Parkes Citizen of the Year, Catherine ‘Kitty’ Dwyer said she was thrilled and appreciated the acknowledgement for the work she and so many others do in palliative care.

For Kitty the best ‘medicine’ for her in dealing with all the sad things that happen is to really enjoy the good things in life. That is why Kitty and her family really celebrated her award on Sunday.

Kitty started the Currajong Carers Support Group and her positive attitude was instrumental in providing the best care and options for our community. In 2010, she established a palliative care volunteer support community for Parkes and successfully conducted grief and loss programs to support community members.

Young Citizen of the Year, Phoebe Potts said she was incredibly honoured with the award. Phoebe was nominated for the Tennis NSW Young Volunteer of the Year Award in 2019. She regularly volunteers at tennis events as well as encourages younger athletes to be involved in the club. Phoebe was Vice Captain of Parkes High School where she played a major part in coordinating many activities and charitable events. Other award winners were:

Community Event of the Year: Pink Up Parkes raised over $34,000 which was donated to the McGrath Foundation.

Environment Award: Elizabeth Briton made significant contributions to Parkes’ environment including the design and development of the new Parkes Town Entry Garden on the Orange Road with significant sustainable features including water-wise native plants and topographic landscaping to enhance waterflow. Elizabeth is working on the design of a bush tucker garden at the Bushman’s Hill precinct.

Cultural Award (Adult): Leanne Wilson started The Little Art Company in Parkes delivering children’s art classes. In 2019, Leanne worked with a group of young artists on an exhibition entitled ‘To the Moon & Back’ to mark the 50th anniversary celebration of the Apollo 11 moon landing.

Cultural Award (Student): Hannah Dunn performed at major Parkes community events, won the junior section of the Performers Platform at the Peak Hill Show and was recently awarded the Dorothea and Andrew Tom Award for Excellence in Music.

Cultural Award (Group): The Parkes Boppers Dance Troupe consist of local children aged between 6 and 17 years. They perform at the annual Parkes Elvis Festival performing on the Memphis Stage, greeting passengers at the Parkes train station, and entertaining at the official festival opening.