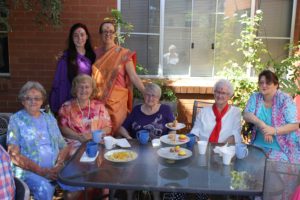 Let’s Do More Together is the theme of the 2017 Seniors Festival, and the festival events organised by Neighbourhood Central certainly provided plenty of opportunities for friends – old or new – to get together.

The Parkes Seniors Festival kicked off on Monday with a sing-a-long concert at the Parkes Bowls and Sports Club. The event included a morning tea and lunch.

MC Terry Ridley entertained the 45 attendees and led the sing-a-long. A special guest performance by the Parkes Public School primary choir delighted the audience with their first public performance of the year. Whilst some of the choir members were seasoned singers, others were new additions to the chorus, but all sang beautifully. Then after lunch, Parkes’ very own Elvis tribute artist Barry Green crooned the crowd with his vast repertoire of songs.

The festivities continued on Wednesday, with a screening of The Best Exotic Marigold Hotel at Neighbourhood Central. The movie is about a group of British seniors who plan to spend their retirement at an Indian hotel only to find it is less than they’d imagined, yet more than they expected.

Three dozen people came along for the Bollywood-themed event, with some get- ting into the spirit of the occasion, dressing in their most colourful outfits and wearing bindis. The Indian-inspired morning tea in- cluded traditional deserts such as Jalebi, Carrot Halva and Pysam, a sweet sago tea made with almond.

Thursday provided a change of pace, with a team of seniors from the region bussing out to compete in a range of sports ability activities at the Central West Elders Olympics in Orange.

The Seniors Festival, formerly known as Seniors Week, is now in its 59th year and is a celebration of the role seniors play and the contributions they make to the NSW community.