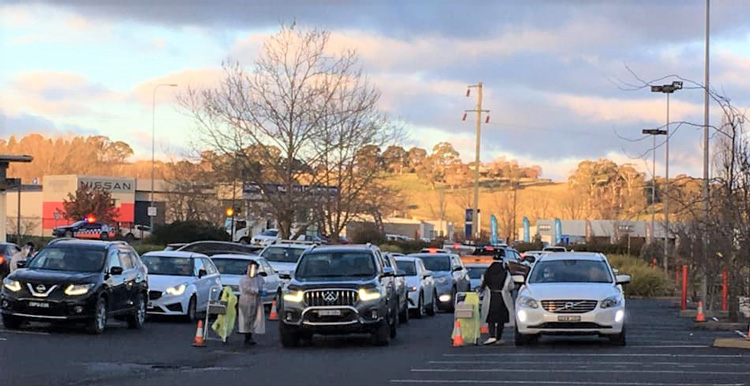 Six lanes of testing at the former Bunnings site in Orange last week during the stay-at-home lockdown meant cars were in and out in under one hour at the peak of testing. (Photo: Orange City Council)

While the stay-at-home order for communities of Orange, Blayney and Cabonne ceased at midnight on Tuesday, NSW Health encouraged people to keep on getting tested at the first sign of even mild symptoms.

“As there has been a case recently in the community, and the ongoing outbreak continues across Sydney, it is vital people come forward for testing,” said WNSWLHD Chief Executive Scott McLachlan.

Member for Orange Philip Donato expressed his appreciation to the community for their patience and cooperation in response to the sudden and unexpected stay-at-home health order issued by the NSW Health Minister in response to a positive local COVID-19 case the previous week.

“This precautionary measure was to prevent our country communities from experiencing the situation we’ve seen unfold in Sydney, where a delayed and passive response to an initial breakout of Delta is still yet to be harnessed more than five weeks into the State capital’s health crisis.”

“I want to congratulate the communities of each the Orange, Cabonne and Blayney Local Government areas for cooperating with the health order, and I wish to extend my appreciation for their patience and understanding.”

“I realise many local businesses and workers have suffered a financial impact, though that impact may have been more substantial if COVID were to spread, such as we’ve seen in Sydney.”

Phil said more than 10,000 COVID tests were done during the lockdown, as well as sewerage testing, which had all returned negative tests.

“I would also like to thank those essential workers who kept the lights on, and all those who facilitated the COVID testing sites and subsequent pathology testing.

“It’s important that we do not become complacent, and maintain our proactive regime of QR check-ins, social distancing, wearing masks and sanitising.”