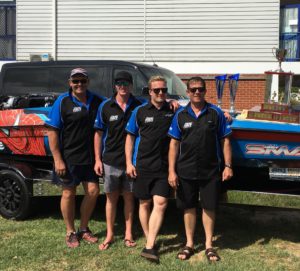 A former Parkes local was part of the Merc Force team taking top honours at the Sydney Bridge 2 Bridge Ski Race recently. The team consisted of driver and boat owner Don Gulley, observer Kevin Boylan, skiers Kris Knights (of Parkes) and Jake Tegart. They completed the gruelling 112km in 38 minutes and 46 seconds, the second fastest time up the Hawkesbury River in the history of the great race. The immaculate 21ft Force with a 1650 Mercury engine is kept in tip top shape by Brisbane mechanic Trent Souwer, who is a vital part of the Merc Force team.

The race starts at Brooklyn and boats travel upstream towards Windsor aiming to finish the race in the fastest time on the day. Local boy Kris achieved his ultimate goal by winning his first ever Bridge 2 Bridge race. After finishing second three years in a row and knee surgery only 12 months ago, Kris was pumped with this huge achievement. “Winning the race that gave me the love for the sport made it all that much sweeter,” he said. The team led from start to finish hitting a top speed of 196km/h. Driver and boat owner Don Gulley was overcome with emotion after striving to win the tough race for 25 years. Observer Kevin Boylan, who has won the race a number of times, made the job of skiers Kris and Jake all that much easier through his knowledge of the river and what it takes to win.

The next event for Kris will be the selection races for the Australian team to head to Seattle USA next July.